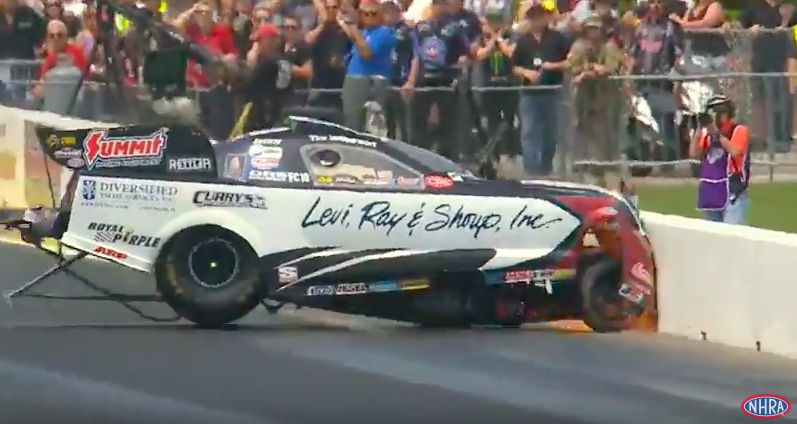 Tim Wilkerson was chewing his way through eliminations on Sunday at the NHRA Kansas nationals when disaster struck and he suffered one of the strangest funny car crashes we have ever seen. We were at the track and in close proximity to the wreck when it happened and even after watching the video it is tough to pinpoint exactly what happened. When we interviewed Wilkerson soon after the wreck he made mention that an oil line had failed causing liquid to get under the tires and leading to the complete loss of control. Some time later we heard that the failure was actually to do with the rear axle and may have been a drive hub. At the time of this writing, Wilkerson had not torn the car down so the official cause is unknown. Speaking to funny car veterans they mentioned that a drive hub failure inside the floating rear end of a funny car could have been the root cause as well.

What we do know is that Wilkerson was close to the starting line when the car got into the wall, pivoted around,  and spun. After finishing the spin the cat piled into the wall to which it was pointed. That impact ruptured the fuel cell which began a tricky fire.

The NHRA Safety Safari was on the scene instantly and suppressing the fire. The chassis was mashed pretty hard, the body was broken in the front, and the team has two weeks to get it all ready for NHRA New England Dragway. The car will head to the chassis shop in a hurry and with luck it will be fixed by Epping. Brian Stewart, who owns  drives one of Wilkerson’s old cars may be tapped to provide a backup.

This may be the strangest funny car crash we have ever seen.

Watch An AMX Super Stocker Rip Off A 300-Foot Wheelie - No Sissy Sticks For This Guy! Project Angry Grandpa: A Beautiful Day, An Open Racetrack, And No Reason To Hold Back