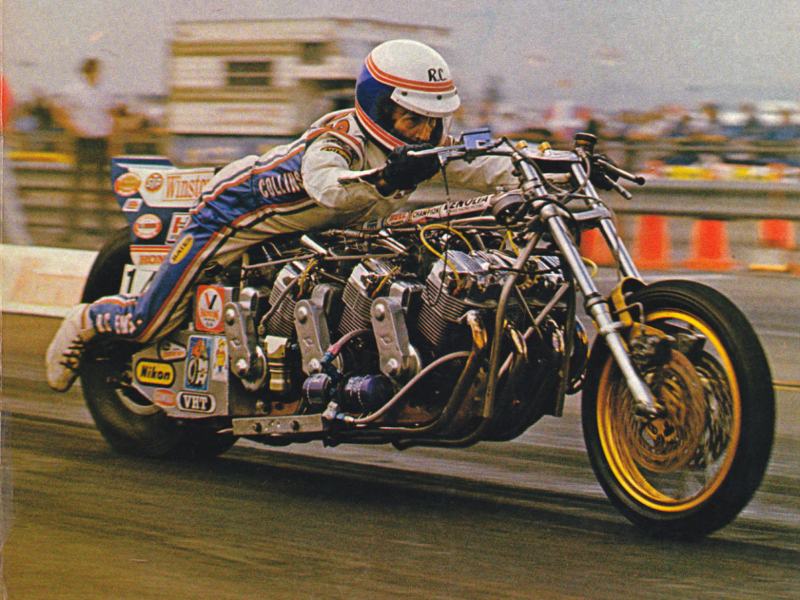 Russ Collins, the great Top Fuel Motorcycle racer, sometimes Top Fuel Dragster racer and survivor of a couple horrendous wrecks during his long and storied career, has died. Collins was a great innovator and thinker in the realm of motorcycle drag racing and a guy who literally lived for the sport. His company R.C. Engineering is still going strong and is known around the world as one of the leading suppliers of high performance fuel injectors for applications ranging from the land to the water. All of this from a guy who gave up motorcycle racing as a kid to become a truck driver and made one fateful trip to California, which sealed his fate in the sport that provided him fame, satisfaction, and 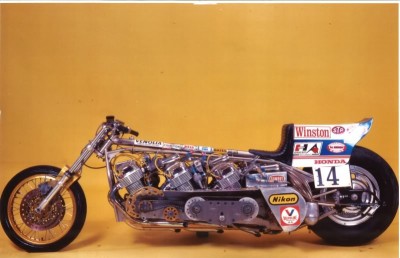 a living from the 1960s on. Collins was always known as a guy who wasn’t afraid to buck convention and he wore that on his sleeve from the beginning of his career on. Quickly adopting the the revolutionary Honda CB750 as his steed of choice, Collins was virtually alone in a sea of Harleys, Triumphs, and other non-Japanese makes. It took him a year to start setting records and to make himself a legitimate name in the sport.

Collins was also a bit of a showman and during an era where it was customary for riders to wear all black leathers, he took a note from the Evel Knievel play book and showed up in colorful red, white, and blue leathers, further separating himself from the crowd as if the high pitched wail of the four cylinder CB750 didn’t do that enough already. We have to imagine that among the (at the time) rough and tumble motorcycle drag racing crowd, Collins was not exactly the most welcomed guy around….especially because he could win.

In 1971 Collins debuted a CB750 that was supercharged and injected. The biked so completely ran over the class he was supposed to be in, Collins stuck that mother in Top Fuel just to give other guys fits. He didn’t win much with that combo but it was quick enough to scare everyone. The problem Collins had when lining up against the Harley and Triumph entries (along with the lone Norton known as the “Hog Slayer”) was the fact that he gave up so much displacement that no matter how hard his 750 worked, it just didn’t have the juju. Turning the crazy knob straight to 11, Collins designed and built a three engined, nitro burning Honda powered bike that was called the, “Atchison, Topeka & Santa Fe” the name derived from a railroad line. This bike was the first to run into the seven second zone for a motorcycle (literally a minute before the Hog Slayer did it) which happened in Ontario, California in 1973. Riding the machine for three years, Collins became known around the world because it was incredibly fast…when it wasn’t trying to kill him. The bike was a dangerous ride and finally in 1976, Collins’ luck ran out and he crashed very hard, wrecking the bike and nearly killing himself. By that time he was so well known and the bike was a worldwide star from all the magazine and other media attention it got. Collins wasn’t done racing…he was just done racing that combo. 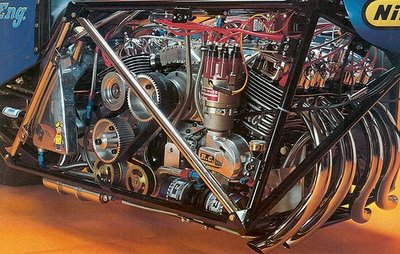 Like Don Garlits who laid in a hospital mentally working over his rear engine dragster design, Collins did the same thing but with motorcycles. The fruits of his hospital stay bore out as a bike called “The Sorcerer” and it was the most radically awesome thing ever seen when he rolled it out of his shop in 1977. Using a pair of 1,000cc Honda engines mounted together as a V8 stlye mill, “The Sorcerer” quickly established itself as the greatest drag racing motorcycle of all time. It ran 7.30/199.55 which was a record that stood for ELEVEN FRIGGIN’ YEARS. That’s how you do it, kids.

Collins kept at the motorcycle racing game into the early 1980s and then he switched gears and started racing top fuel cars through the 1980s and in 1991 he suffered one of the most wild looking and completely catastrophic blow overs of the era at the NHRA Winternationals driving a top fuel car owned by Bill Miller. The coverage of this event was (of course) handled by Diamond P Sports and someone has put the clip of the incident on YouTube. There’s the expert call of the action and then there is a post wreck interview with Collins who was brutally honest of his own ability to stop what had happened to him and judging by his words and the sound of his voice, he was pretty humbled by the whole experience, which was par for the course every time this happened to a seasoned top fuel veteran back then. VIDEO BELOW

Russ Collins was one of the sport’s great innovators on two wheels and a fine shoe on four. He followed his dreams and passion and it led him to an ultra successful racing career and a very successful career in the business of high performance as well. Russ Collins is a member of the AMA Motorcycle Hall of Fame and his son is in the process of restoring the Sorcerer motorcycle to its former glory. Collins was 75 years old.

Click here to see Russ Collins suffer an incredible blow over at the 1991 NHRA Winternationals – He walked away! 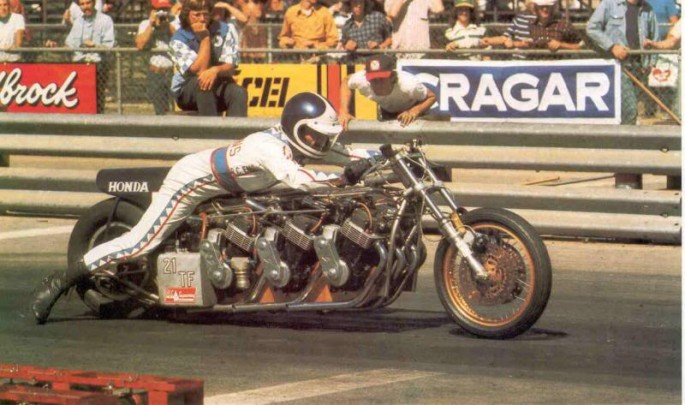 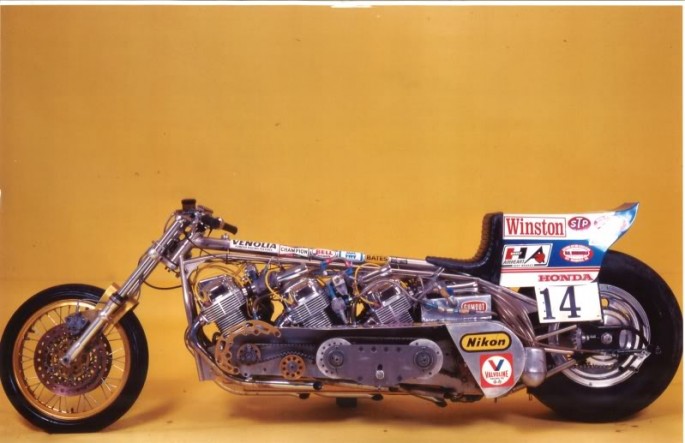 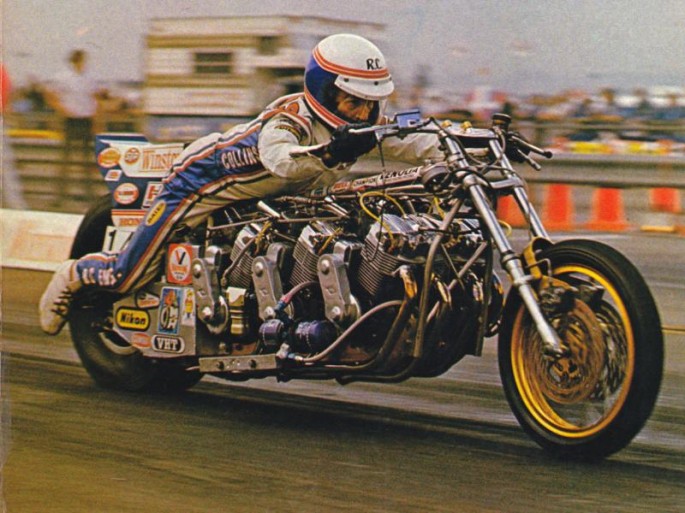 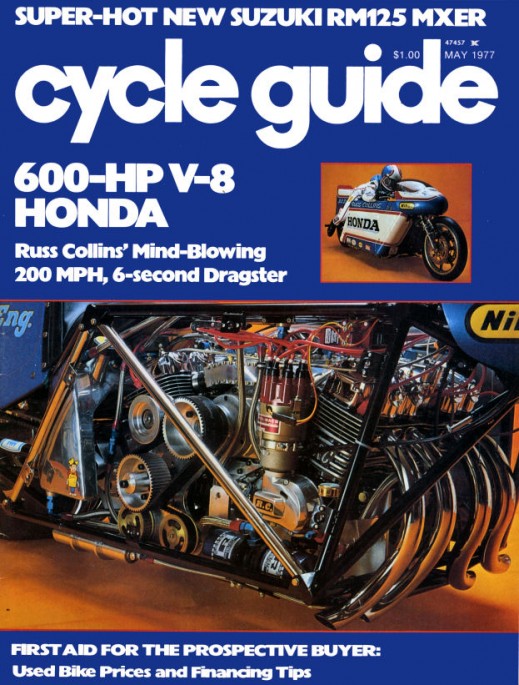