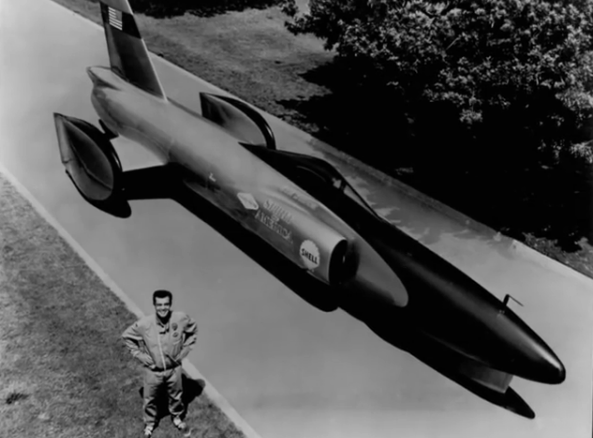 In many ways, Craig Breedlove was the ultimate California hot rod kid of his era. Who else was able to dream up and actually see through a futuristic looking, thrust driven monster of a car that was able to wrest thew land speed record from the Brits? Yes, Art Arfons soon became Craig Breedlove’s foil but in terms of a photogenic, young, California guy who beamed in front of a camera, Craig Breedlove was the right kid for the right time. In this spectacular video, made as part of the Pennzoil “Breaking Barriers” series of films, we see Breedlove as we rarely have. He gives an amazing account of his record breaking runs on the salt and especially of his ultimate triumph, which was running a two way average of 600mph to put a cap on what many consider the greatest era in the pursuit of the world’s land speed record. We’re not ashamed to admit that we actually got kind of misty at one point because Breedlove does when he talks about the moment he was handed the folded slip of paper from solemn officials denoting the fact that he had averaged 600mph during his two record runs. To this day, nearly 50 years later, it still busts him up and it got to us a little as well.

We’re not sure how we have missed this series of videos because they all look spectacular. We’re going to jump around and show you the best stuff from the series over the next few days but starting here seemed pretty natural as there are lots of people who love the history of hot rodding and land speed competition on the salt in Readerland. The first two minutes of the video are lead in for the main body of the deal and the whole thing is worth watching. From the intro with John Hennessey to the beauty shots of the incredible 911 roadster, this is really good stuff. Pennzoil obviously spent some bucks on these films and it shows. The production is slick and the look is totally professional. We’re going to watch the rest of them right now!

PRESS PLAY BELOW TO SEE A MOVING, DETAILED, AND TOTALLY BITCHIN’ ACCOUNT OF CRAIG BREEDLOVE’S RISE TO LAND SPEED RACING IMMORTALITY FROM THE MAN HIMSELF –