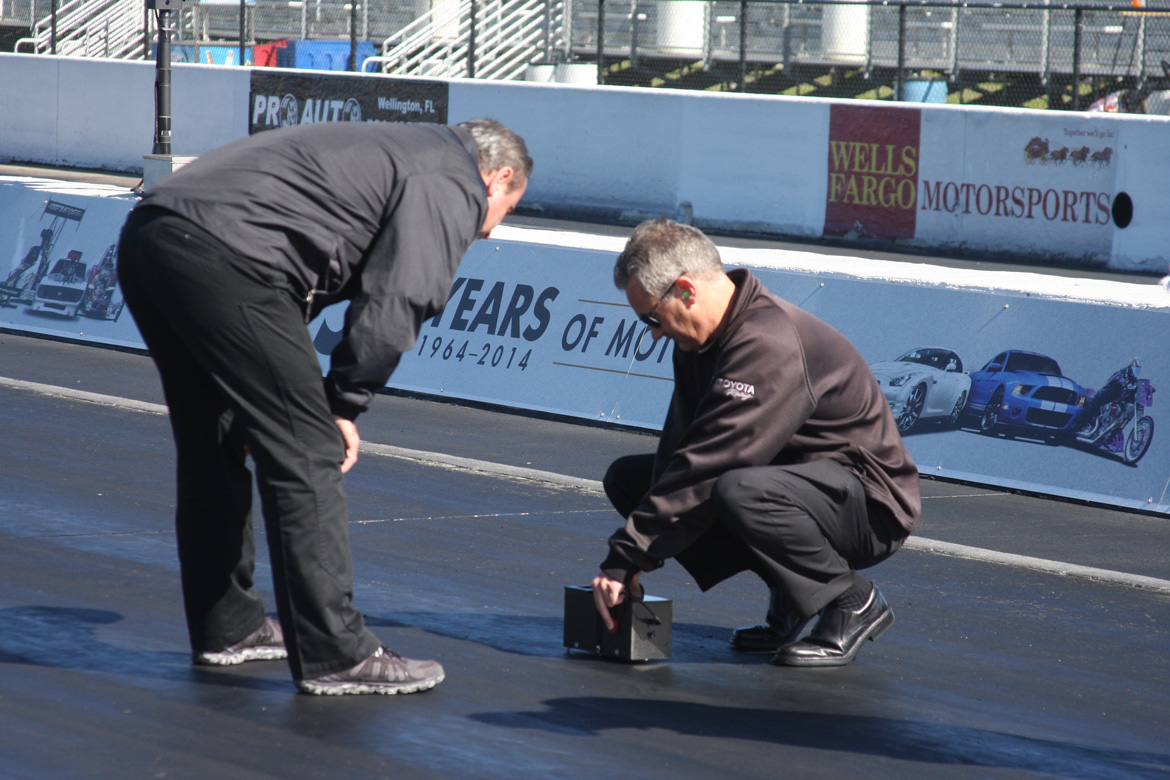 The photo below was taken yesterday on the starting line of Palm Beach International Raceway and it shows an interesting device that was being used, maybe for the first time in public, by the fellow in the Toyota Racing shirt. We can tell you that this device is a device for measuring traction. Typically most teams use a device which requires the operator to stand on and then turn a handle which then produces a reading on a gauge showing the amount of force needed to have the rubber pad on the bottom slip against the track. Tuners then establish a log book of these readings against their tune-ups and try to tie all the information together when setting the car up for runs. The major flaw in that program that we think this device takes out is the human element. We have seen different device operators using it in different manners. Some jerk the handle hard and some take a more gradual and gentle pull. There is no human element in this device.

WE ARE COMPLETELY SPECULATING NOW: This is a six grade educated guess. We think that there is a rubber pad on the bottom of this device being turned by an electric motor with a load cell or something of the sort and that it is relying on its own weight to hold it to the ground for the purposes of being completely repeatable. We can think of a dozen ways that this could be working inside but we think that the carbon fiber exterior of this device is the LEAST trick part of this device.

Given that this device seems to have been used in support of Al Anabi racing, we’re guessing that when we try to get more info, we’ll be given little to nothing to go on. That’s not going to stop us from asking, which we did yesterday. The guy in the Toyota shirt was super cool and didn’t just blow us off. However, after answering that it was, “a device for measuring traction” he kind of clammed up and went about the business he needed to tend to.

There appears to be a plug on one end that could be used to download information and there seemed to be a USB memory stick sticking out of it. There was also a sweeping gauge like you have on your multi-meter in the shop. We’re thinking that inch-pounds or Newton meters may be the increment used. The dongle that was hanging off the end wasn’t visible for long but it kind of looked like a plug you’d see on an EGT sensor (female side).

The man in the Toyota Racing shirt was keeping VERY good care of this device and cradling it like it was a newborn child. Dropping this thing would probably result in a repair bill that would make even Al Anabi Racing wince. If Toyota Racing Development was involved in the creation of this device, that’s pretty bad ass. We’re going to keep poking around for information on this device. We dig stuff like this because today’s top level drag racing scene doesn’t have a lot of secrets. This appears to be one! 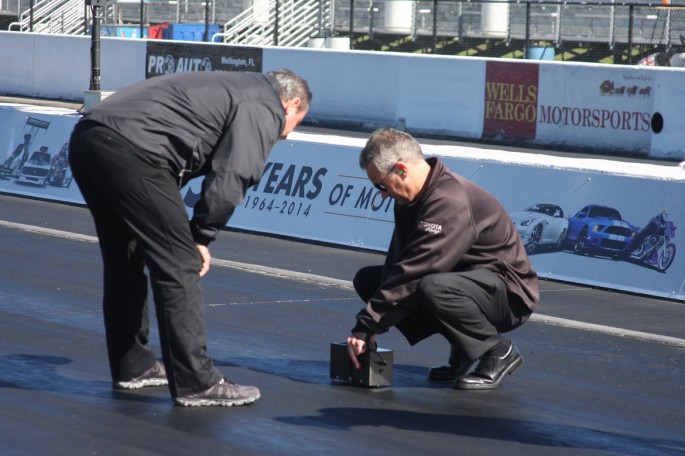