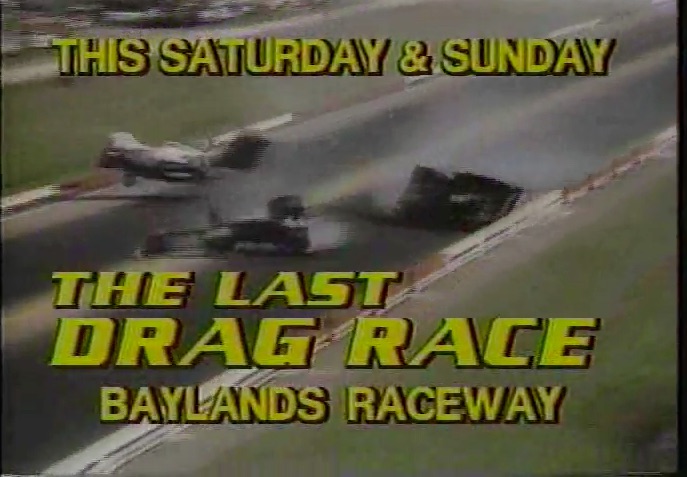 Fremont Raceway or Baylands Raceway Park in California was a staple of the drag racing world for the better part of 30 years. Amazingly for those who hung out there, we are not coming up on the 30th anniversary of the track’s closing at the end of 1988. We stumbled upon this TV commercial, voiced by Steve Evans that lays out the “Last Drag Race” that was held at the track. It sure seems like a blow out affair with funny cars, top fuel dragsters, nostalgia action, and all the big heroes of the day. Of course, the timing of the race allowed all of those racers to be ready to rock because we assume it was run very closely to the NHRA World Finals which would have had all the bad asses in the country a few hours down the road in Pomona.

Starting as so many strips did, on a war surplus airfield, Fremont or Baylands Raceway Park became a well known track across the country. It was not some big mega-facility but it was a functional, working, weekly strip that served the needs of the Bay area community. Located about 50 miles from Sears Point, it was across the bay from the city of San Francisco and by all accounts kept pretty busy over the years. The track was replaced by a large car dealership or at least that is what was slated to occupy the property according to the news report below.

The land the track was on was not owned by the track but rather by the railroad. They apparently got an offer they could not refuse and that lead to the closure of the strip. Sad stuff and a very typical story when we talk about drag strips in California.

If you ever raced at Baylands or Fremont, here’s some memories for you!