Video: Frankie Taylor Goes 3.48/216 At Rockingham – Traction Control On Board – Good or Bad? 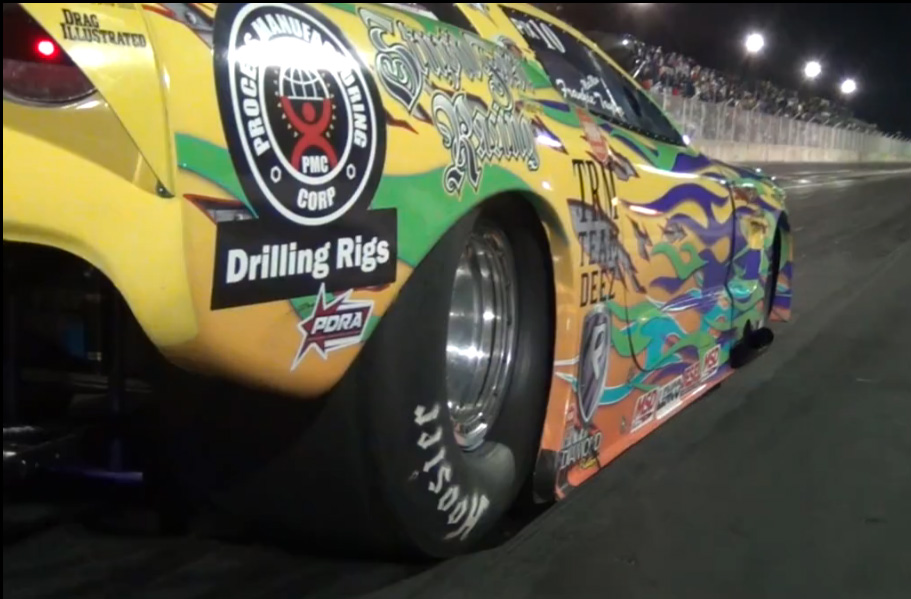 Of all the huge runs made at the first ever PDRA race at Rockingham Dragway last weekend, the one that the internet has really been freaking out about is Frankie “The Mad Man” Taylor’s 3.48/216 mph shot down the famed North Caolina strip. This is the first ever door slammer to break into the 3.40s in an eighth mile distance and he didn’t just tickle it, he jammed it right down in there with the .48. One of the interesting things about the run is that the car was equipped with the new Profiler traction control system from Davis Technologies. We have to stress right now that THIS IS COMPLETELY LEGAL. PDRA rules allow for the use of these systems and Taylor was well within his rights to be using it. The benefits are pretty obvious but we also have to clarify another very important point.

This is not like your Ford Mustang or Chevy Camaro that has a built in, factory programmed traction control system. The Profiler needs to be tuned and setup to work with the tune up in the car, so much like the clutch, ignition timing, gearing, and other elements of the car are changed from run to run, this system is also tuned. You can blow the tires off the car with this system if you get too aggressive with the “map” (for lack of a better term) that the Profiler uses to control wheel speed. On the other side, the engine has to be making the suds to use that newfound traction, so in the raw horsepower sense, Taylor’s run is very, very impressive in our eyes traction control or not.  We just want to make the point clear that this isn’t something you bolt on the car, plug into the MSD Power Grid and then go set world records falling out of bed. All that being said, we want to know what your opinion is on the matter.

Rumors have popped up from time to time in drag racing that various teams were using some sort of traction control in their cars or had found some weird way to tune their stuff and eliminate the issue of smoking the tires. Were those stories ever true or were they the work of zealous (and often times slower) competitors? We’ll largely never know. The inclusion of traction control systems like the Davis Technologies piece in many different racing organizations now would seem to indicate that there is a general warming to the idea of traction control in the sport. Where it is within the rules to use and can be turned into a potential competitive advantage, it seems like a natural thing to use whereas in areas where the technology is not legal and it may be secretly employed, we think that is nefarious and wrong.

We think that Taylor’s 3.48 is the first shot in a war that will see cars tickling the 3.30s by the close of the 2014 racing season. These types of leaps are not usually made in this fashion but with the ability to use stuff like the Profiler it is a whole new ballgame out there. We think the run and the technology are impressive and cool. What do YOU think? Watch the video below and then give us your opinion!