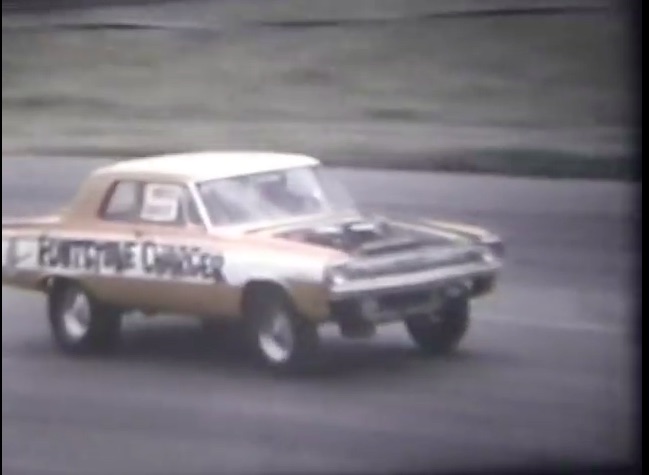 It has been a while since I combed YouTube for some vintage 1960s drag racing video. My search the other day garnered the awesomeness below which features footage from places like Dover, Lebanon Valley, Indy, and others. It also features a raft of amazing and awesome cars. There’s some “fake sound” dubbed over the video which, while it does not make exact sense, does change the dynamic of the 8mm film in a positive way. Less than 5 minutes into the film you’ll see stuff like Bill Flynn in the Yankee Peddler Barracuda, Bobby Lagana Sr. in his Chevoco Falcon (Ford car with Chevy motor), a gasser wiping out timing equipment, the Bob Ramstrom Flintstone Charger and more. Frankly, it all just gets better from there.

I love these old videos because of what they represent. It is like being a fly on the wall and peeking back into these fun moments in time. There was a period where I was bummed that I missed the 1960s and 1970s in drag racing and while I’d love to build a time machine and check them out, the era that the sport exists in now is not one I would trade for the world. I’ve been going like my hair is on fire since late January and have done big tire races, radial races, NHRA races, invitational races, and more. I have witnessed more money being won in about two months than was likely awarded in the entire of the years this video was shot and that is just the stuff I have seen personally!

There’s a high level of cool and character that the cars in this video exude. Many people today say that there none of that stuff left in the drag racing world. It’s there and it is not all that hard to find.

Press play below to see some awesome action from multiple tracks 50 years ago!

Watch Barry Sheene Survive A 170mph Crash In 1975 And Laugh About It In The Hospital A Mucky Roll Over Video: Watch This Dude Turn His Mud Boggin' Jeep Over Onto Its Lid