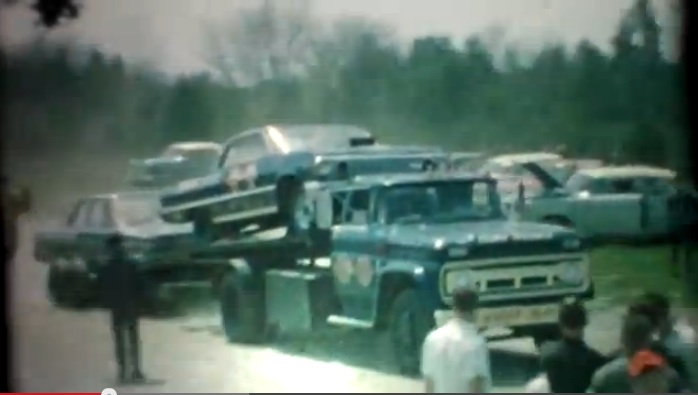 We’re in a nostalgia drag racing kind of mood this week as we’ll be heading to Bowling Green, Kentucky in the morning to bring you the live streaming action from the 2014 Holley NHRA National Hot Rod Reunion. While that modern race will bring out a bunch of truly old school and mostly old school looking drag cars, there’s not substitute for the real thing and this video from 1964 is the real flipping thing. The footage was taken at Louisa Drag Strip in Louisa, Virginia and it features some of the neatest cars of the day as well as some perfect pit footage that you will love as well.

There’s been an image floating around social media recently that basically says racers are sitting in their bazillion dollar toter homes and complaining about how expensive racing is. There’s no such thing as a toter home in this film unless you count the cab of Hubert Platt’s C50 truck, which is likely slept in many, many times. Also dig the fact that he has a Z111 and A Ford product hanging off the back of that truck. Hubert was a racer and before he had factory money, he would race the fastest thing he could afford…or a pair of them as the case may be here.

The other car that really got our attention in this video is the early Corvette. It is literally destroying everyone by a wide margin and aside from one run where  it looked like he might have been in trouble, the Vette earns the class trophy at the end of the day. This is a four minute vignette of vintage drag racing perfection. We think you’ll love it!

PRESS PLAY BELOW TO TAKE A FOUR MINUTE TRIP BACK IN TIME TO A NICE DAY IN 1964 AT THE DRAGS IN LOUISA, VIRGINIA –

Bitchin' Or Bogus? Would You Drive This Mash Up Of A Firebird and A Superbird? Tell Us Your Thoughts On The Trans-Bird Hot Rod Power Tour 2014: Day 2 Coverage From Knoxville, Tennessee - A Collection Of The Coolest Stuff