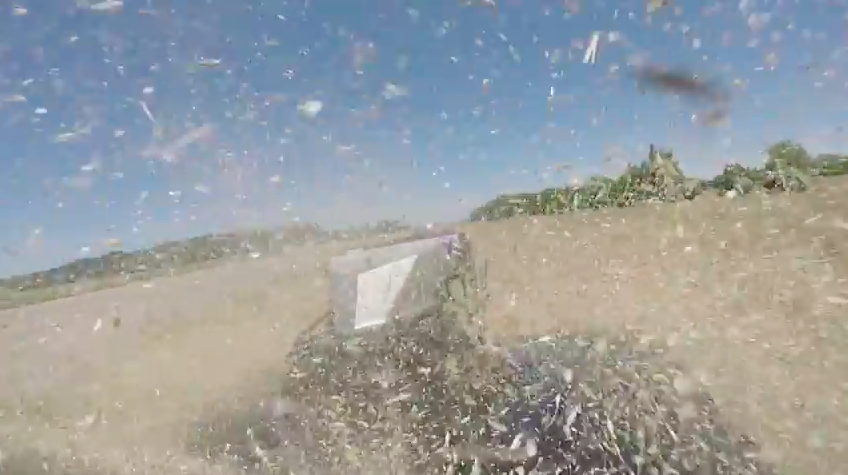 There’s guts and then there’s GUTS and Urban Hillbilly’s Sean Melton has both. Last week we showed you his count down of the top 10 insane wrecks he had ever filmed and a couple of them saw cars coming dangerously close to his perch at the end of the track. Well, he had another of those situations last weekend and this one was feet away from a complete disaster. The guys at Eat Sleep Street were holding their cash days event on an old airport runway and Melton was set up at the top end of the eighth mile track, literally in a wheat field.

During a match up between Kye Kelley’s Shocker and a band new blown hemi powered Impala called GUDFAR campaigned by James Haug, Haug lost the handle on the car after blowing the tires off at the hit and instead of tracking straight the car hooked hard right and launched into the wheat field next to the track! The thing started mowing down wheat at a pretty amazing rate which is kind of awesome to watch but the scary thing is that the guy was on a beeline for Melton and his scaffolding until he steered right and made a bit of an arcing pass around him! Sean has had some close ones over the years but this one takes the cake.

Another point along the guts front. This is a brand new car and it was Haug’s third time ever stepping on the gas! Kelley went right down the track (like he always does) and easily got the win here. After the fact, Haug seemed to be on a bit of an adrenaline high when Melton approached him with the camera. We give Huag credit for throwing down with Kelley in such a new piece.

We’re glad this one ended with a good video and not a total nightmare.

Press play below to see a blown hemi powered Impala head through the wheat!