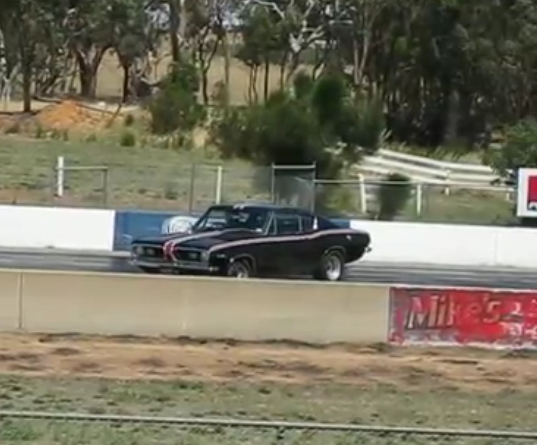 There are times in a man’s life when he just has to know when to quit and this guy in the Barracuda was facing one of those times when his pristine car ended up sitting crossways at the drag strip in Australia. Unfortunately for him, he didn’t take the hint and things literally got worse from there. This could literally be the ugliest drag strip pass of all time, at least the ugliest one we have ever seen involving what can only be described as a relatively tame street car, right?

In watching the footage a couple of times, it seems to us that the car is suffering from a broken axle. We have seen plenty of guys running spools or lockers over the year shear an axle shaft and have the car act like this one does, basically steering itself with the rear end as one tire is trying to apply the full power of the car. This driver happens to get the thing loose before the 330′ mark and actually end up sideways across the track.

Rather than thank his lucky stars that he didn’t wound the car, the driver decides to back up (partially) into his lane and hammer on the gas. The car immediately becomes awkward and squirmy before it completely washes out from under him less than a couple seconds later bashing the wall in both the front and rear, causing untold thousands in damage and leaving us no choice but to dub this the worst drag strip pass of all time.

What do you think? Have you seen something more weird than this?

PRESS PLAY BELOW TO SEE THIS BARRACUDA GET MASHED –

Top Sportsman Wreckage: Watch Wade Keifer Smash The Wall During Qualifying At NHRA Denver No, Not The Band: This 1948 REO Speed Wagon Is Packing A 12V Cummins Swap And Could Be Yours!