Watch This Awesome Old Chevrolet Sleeper Van Take On A Shelby GT500 – Does It Kill The Mustang? 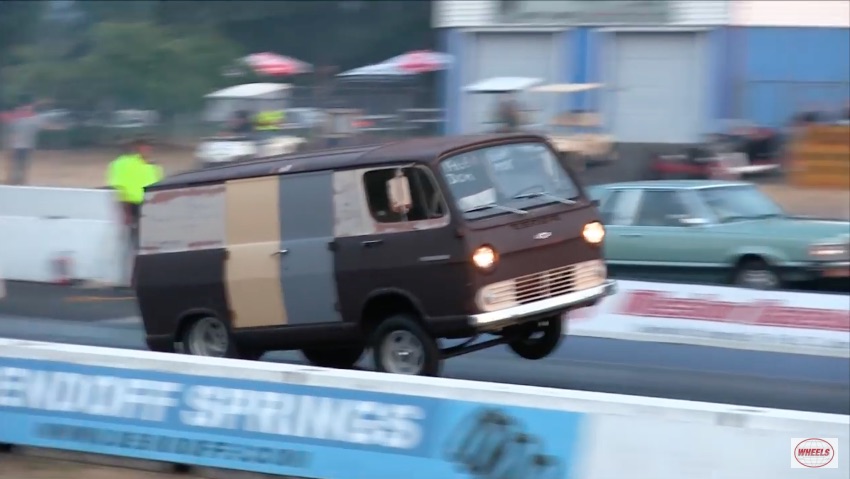 We loves us some sleepers around here and while the rear tires and exhaust note of this van may be a bit of a tell, we’re still enamored with the unique primered box on wheels. This awesome old Chevy sleeper van was captured on video racing at Mission Raceway Park in Mission, British Columbia, Canada. You’ll see some wheels up launches and you will also see the rig take on a Shelby GT500 Mustang. The Mustang has a set of drag radials on it and beyond that we’re not sure with regard to modifications. We know exactly nothing about the Chevy Handi-van. Ok, that’s not true, we do know that we love it and everything it stands for.

The van launches way better than we would have expected, torquing over onto its right rear tire and hanging the beam axle, leaf sprung front end in bitchin’ fashion. Obviously aerodynamics are not this thing’s friend. After about 100mph (maybe less?) the engine is trying to plow that huge and very blunt front end through the invisible enemy that is air. Engine? No idea. Transmission? Take a guess.

The other thing that this matchup highlights is what we love about drag racing. You can literally do it anyway you want and all of it is right. Want a late model muscle car that can get you places in comfort and then level all comers at the strip? Perfect. Want to build a wacky and bad ass van to hammer those guys in the “comfy cars”? Do it.

Anything Can Be A Racecar If You're Brave Enough, Like This Chrysler Crossfire! Watch This Clean Second Generation Camaro Come Mere Inches From Being Totaled At The Spectator Drags

2 thoughts on “Watch This Awesome Old Chevrolet Sleeper Van Take On A Shelby GT500 – Does It Kill The Mustang?”