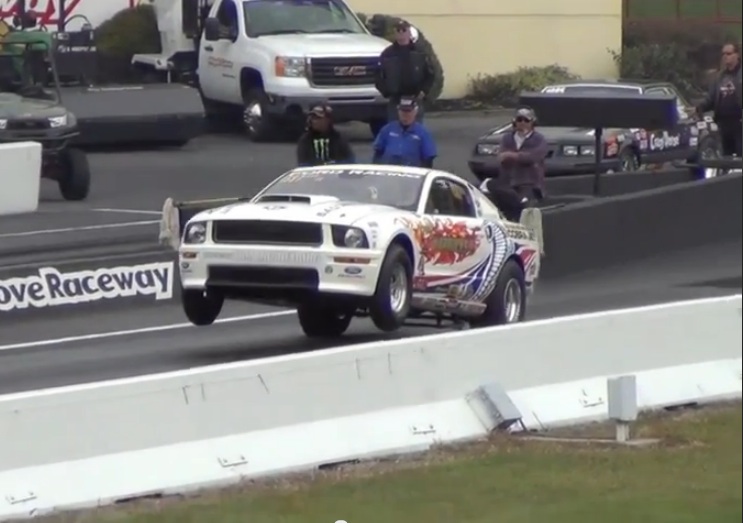 It was May of 2001 when the first nine second pass was made in stock eliminator. It was April of 2012 when Don Fezell punched his Cobra Jet into the eight second zone, smashing the eight second barrier, so it is only fitting that the man from DuBois, Pennsylvania retake the record again with his trusty AAA/SA Cobra Jet Mustang with the blistering 8.507/158mph shot you will see in the video below. The run was made during the Dutch Classic at Maple Grove Raceway and as was the case with the big wheelie we showed you from the race yesterday, the announcing is being done by Lewis Bloom who notes that it was the quickest run ever instantly.

Fezell is an interesting and inspiring character. His drag racing resume begins in the 1960s where he recorded wins at races like Indy. He has an incredible car collection made up of factory drag cars like Super Duty Pontiacs, Cobra Jet Fords, Z-11 Chevrolets, and more. He’s a guy in his middle 70s and he is the quickest stock eliminator racer ever. What’s not to love? What’s even cooler is how the car has evolved even through this year. Before the US Nationals, the car was a stick shift machine and it was one of the more unruly beasts that we were able to see on a regular basis during NHRA races. Violent and temperamental, Fezell and crew decided to swap the car to an automatic before Indy and after getting their combo sorted and pulling a 500ft wheelie one day, the car really looked strong. It has run very well since then and this run is about as picture perfect as you can expect, although some may argue that the wheelie cost him some elapsed time.

It has been really cool to see this car, especially with this man really come around through the second half of the season. It is brutal and it sounds awesome with the blown 5.4 bellowing down the track. It’ll be no shocker to see those 8.4 second elapsed times start to ring up on the boards next season when COPOS and Cobra Jets are more finely tuned. Also, the introduction of the supercharged Drag Pack Challengers will be a game changer that’ll have everyone pushing their stuff hard.

Transferring all that power and violence through a nine inch slick is pretty cool. Today’s world of drag racing is filled with small tire action and this is the class that really got the whole thing rolling. Ford lover or Ford hater, this is impressive to watch.

PRESS PLAY BELOW TO SEE DON FEZELL PUSH THE ALL TIME STOCK ELIMINATOR RECORD TO THE EDGE OF THE 8.40S!