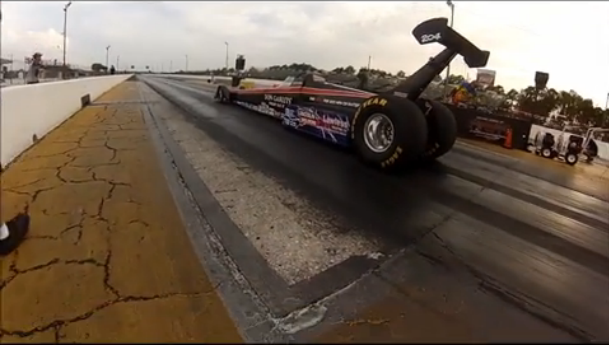 As we have been reporting, Don Garlits and the SR-37 Quest team have been active over the last few days making test passes for the first time just days ago. While the team did not clip 200mph yet, they did break the standing record for MPH in the quarter mile with an electric powered car with a 184mph lap. This is a major performance milestone and it has certainly gotten lots of press, which is cool. There will be another test session coming soon where the 200mph barrier should fall, assuming that the team gets the bugs worked out that any group would experience on a first trip to the track with a new car, let alone one with a bleeding edge (technologically speaking) power source.

We were wondering when video of the runs would come out and that have. It is pretty wild to watch and hear this car run because (as you’d expect) it is completely silent outside of the mechanical noises that come from the rotating parts and the sound that the tires make fighting for grip the whole way down the course. Some of you seem to think that our enthusiastic reporting on this project means that we’d love to see drag racing go ‘lectric. That’s not the case at all. This is an interesting study in what can be accomplished with the battery technology of today and it involves the greatest drag racer who has ever lived. Those two elements make it BangShift approved. Plus you know we love freaky stuff around here!

PRESS PLAY ON THE VIDEOS BELOW TO WATCH DON GARLITS RUN DOWN THE STRIP IN SR-37, THE ELECTRIC SWAMP RAT –

The Worst 1955 Chevy Ever Built Is For Sale On Craigslist - This One Hurts More Sweet, Sweet FE Photos From The 2014 FE Race And Reunion - Beaver Springs, Dragway