Watch The Most Dramatic Moment In Drag Week History – The Beyond All Thrash That Got Larson To The Line, But Not The Result He Wanted 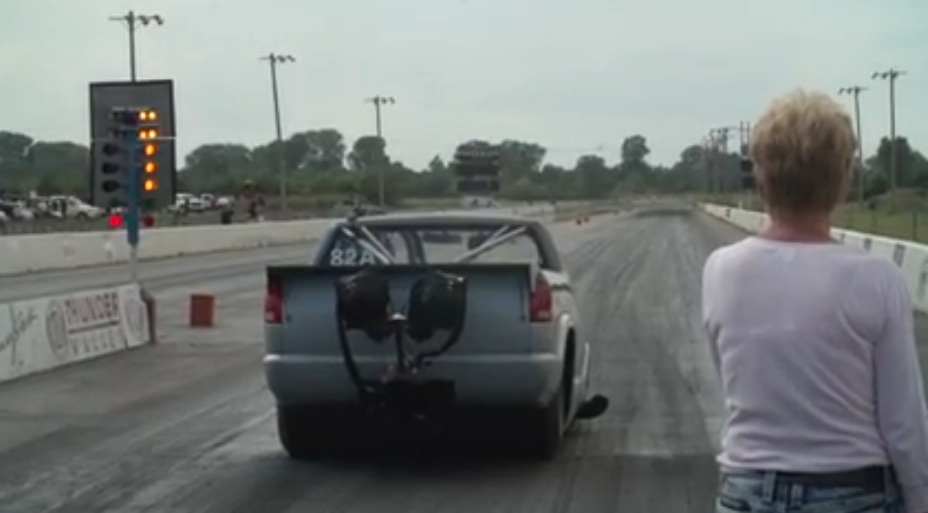 Ultimately Chad will tell the whole tale of his 2014 Drag Week with Larry Larson. He’ll give you the details on how they got about an hour’s sleep total in three days, how they nearly gave up in Topeka, how encouragement, fans, and sheer force of will kept them going, and how they actually made it to Friday on Drag Week, which no one can really fathom considering how their week was going. People have had an easier time of sneaking out of North Korea than these guys had on Drag Week.

Chad will tell you about all of that because he lived it first hand from the passenger seat, the starting line, and the garages where they slept. I wanted to share this video today because we’re at the last day of the actual event (Shootout tomorrow) and it is a really compelling piece of video that shows how close Larry, Chad, and an army of old school drag week racers pulled together and helped their friend in his time of need.

The blow by blow will be incredible but allow me to set the scene. Larry and Chad were stuck in Topeka overnight on Tuesday. They left in the middle of the night for Noble, Oklahoma where we were racing on Wednesday. The men had until 2:15 to get to Thunder Valley and be sitting in their staging lanes. The truck rolled in to an uproarious bout of applause from the crowd and an army of impromptu helpers descended on the thing like locusts. The transition from street trim to race trim was hastily completed in minites and the truck rolled into the lanes with ONE MINUTE before we would have shut them out.

The two sleep deprived men went through their final checks, Larry strapped in, and fired the truck. He’s the last car in the place. We’re all losing our minds. Was he really going to just roll in and uncork a run to save his week? Would the Babe Ruth of this event call his shot again and plug one into the stands? We were talking about the sheer triumph of making it into the lanes on this day when Larry burned out and came back. As he began to stage the truck the place was about to explode. Then….nothing. The truck suffered a driveline failure and rolled slowly down the track. Silence. Confusion.

Chad will fill us in on the gory details but this video shot by the guys at Hot Rod spells out the scene amazingly well. Larry is still in, racing Drag Week until the end but he is not in contention for the Unlimited title. He is, however chasing Andy Frosts record. Stay tuned, this could be awesome.

11 thoughts on “Watch The Most Dramatic Moment In Drag Week History – The Beyond All Thrash That Got Larson To The Line, But Not The Result He Wanted”