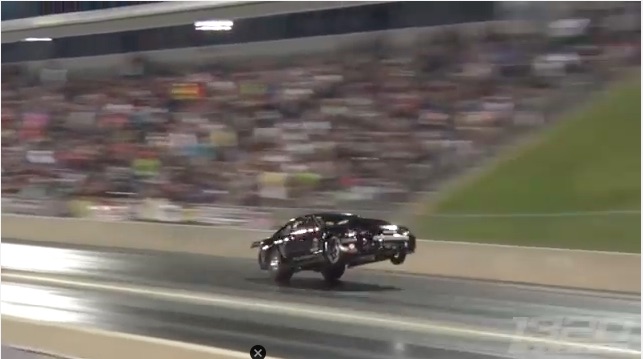 The twin turbocharged big block Chevy powering Frank Soldridge’s Mustang is a very, very potent piece. Like all of the cars running in the nearly unlimited Radial VS the World class, it is on the ragged edge in every way possible.

The engine is working as hard as it can, the chassis is doing whatever it can to plant the tires, and the stuff behind the engine like the transmission and rear axle are transferring thousands of horsepower from the motor to the ground. People often wonder why these cars “fly” or at least try to fly where many others do not. Firstly there’s not wheelie bars on the back of the car. The lack of bars has been a hallmark of the class since the beginning and while many people think that this needs tone changed, we don’t. All of the racers who sign up, strap in, and attack the class know the rules and they know that wheelie bars are not part of the program.

There’s the fact that radial tires, like a clutch or a lock up torque converter work without slippage. The tires cannot be spun to build wheel speed like a slick because once they break traction they run away and do not react anywhere near the same as a slick. With a small slick tire many of these cars would be black tracking down the course rather than climbing the ring gear with all of the available traction.

Then there’s the horsepower. Turbocharged big blocks that can be tuned to deliver their power in a virtually infinite curve and the way that the crew chiefs and car owners roll that power in can be a contributing factor with this situation as well.

The best part of this is the fact that Soldridge drives the car like a master. You can hear him working the throttle and controlling the situation. That’s not something you’ll see happen very often and with all of the cars that have actually flown at the race over the years, Frank was a rare exception in the fact that he kept the car on the ground…mostly!