Watch Gene Hector’s Insane Wreck From Texas And See How Close A Photographer Came To Kicking The Bucket! 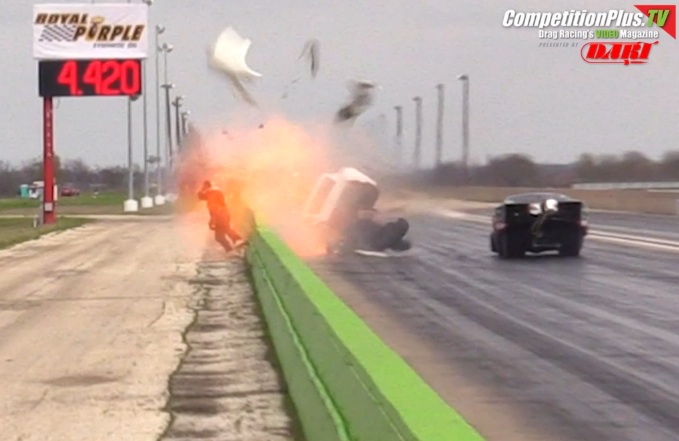 It wasn’t just Lizzy Musi that got into a big smash ’em up wreck at the PDRA event held last weekend at the Texas Motorplex as Gene Hector also suffered a massive wreck and his was perhaps more spectacular than Musi’s. We know for a fact that the photographer who was leaping for his life out of a massive fireball would agree with us. To say that the PDRA race last weekend was a tough affair would be an understatement. There was lots of rain early in the week and the track crew along with PDRA officials worked long and hard to get the event in (which they did). We give them lots of credit for hanging with it and not throwing in the towel. The racers traveled all that way to compete and they got the chance because of the hard work exhibited by the organization.

In Gene Hector’s case, his blown C7 Corvette left the starting line and right from the hit was not looking all that happy. You’ll see the car moving around and being generally unsettled before crossing over the track and doing so IN FRONT of the car he was racing before piling headlong into the guard wall, erupting into a massive ball of fire, and skidding hundreds and hundreds of feet on its roof. It is amazing to see how far the car travels once it gets turned upside down. You know that Hector just wanted that ride to stop as soon as possible.  As the C7 bodies are virtually brand new to the category, we suspect that this car was also a new piece and probably didn’t have a ton of runs on it. We hate seeing anything get hammered but especially a new car that someone has obviously invested heavily into.

As for the photographer…wow. You can see it multiple times. The car wrecks into the wall right by where he is standing and then he performs a dive/combat roll operation to get away from the cloud of fiery death that he was ensconced in. Shooting at the top end of a race track is exceptionally dangerous and this proves why. It is kind of wild that they even had people that far down course shooting, but as you will see in the video, he’s OK and probably got some insane photos of the whole thing. Either that or he got nothing and only has this video to remember the experience.

So you want to go pro mod racing? It ain’t that easy!

Gearhead Guys You Should Know: Paul Bigsby This 1935 International Wrecker Is An Incredible Original Survivor Truck - A Working Rig That Has Lived The Good Life!

2 thoughts on “Watch Gene Hector’s Insane Wreck From Texas And See How Close A Photographer Came To Kicking The Bucket!”