Best of 2014: Watch The Most Horrendous Doorslammer Wreck We Have Ever Seen Anyone Survive – Jerry Yeoman At Wichita International Raceway

Dec 28, 2014Brian Lohnes1320 Videos, BangShift 1320Comments Off on Best of 2014: Watch The Most Horrendous Doorslammer Wreck We Have Ever Seen Anyone Survive – Jerry Yeoman At Wichita International Raceway 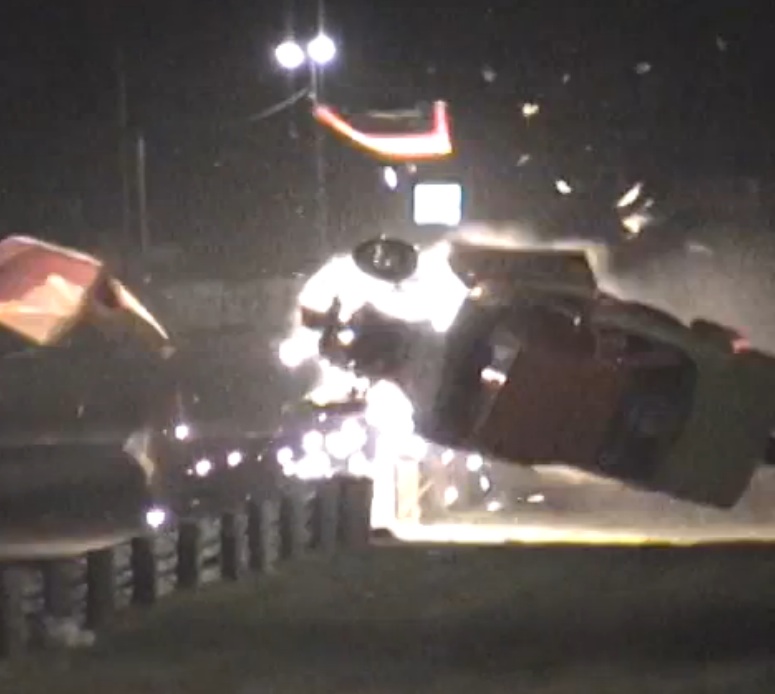 Sean Melton at Urban Hillbilly Action Videos is like us. If someone gets hurt in a wreck, he doesn’t run the footage unless he knows the guy made a full recovery or he gets permission from the party involved to show the video. In this case we’re happy to report that Jerry Yeoman, who rode this disaster out made a full recovery from his injuries an races today. He also gave Sean the nod after he asked him for permission. There’s no date on this video but we’re going to say that it was shot in the 2002 time frame. We’re saying that because it was about that time that Jerry Yeoman was competing in the Steve Bruce Race Cars built Pontiac Grand Am mountain motor pro stocker you’ll see get destroyed here. This race must have been some sort of quick eight or quick 16 shootout at what was then called Wichita International Raceway. The facility is now known as Kansas International Raceway. Yeoman is a successful racing engine builder who hails from Kansas, so it makes sense that he’d find himself at this track as it is likely “close” to home.

In the video you will see Yeoman lined up next to a blown Camaro and launch down the track. Things are OK until about the eighth mile when the car makes a dead left and crashes head on into the steel guardrail. Yeoman’s car busts straight through it, exploding and launching into the air before entering into the most sickening series of barrel rolls we have ever seen a car make. Honestly. You thought Glidden’s deal at Atlanta in the 1980s was bad? He didn’t have anything on this one. Melton estimates it is 12-14 rolls before the whole works comes to a rest on its roof and people descend on it to get Jerry out. The car maintained its shape and Jerry was held in place by his belts. His injuries prevented him from “walking away” so to speak but as we mentioned above, he made a full recovery and races a pro mod today.

Pay attention to the stuff flying off the car as it rolls, particularly the wheels and tires. They head for orbit, bounce off the ground, and generally becomes unguided missiles flying toward what looks to be the pits. This is truly incredible footage.