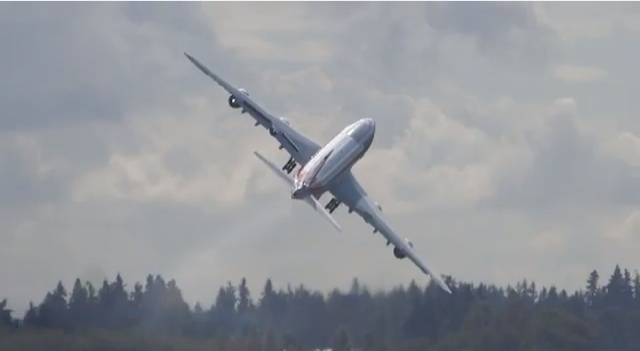 It’s a common tradition for airlines that take delivery of a Boeing aircraft from Paine Field in Everett, Washington to do what’s called a “wing wave”, which is a couple degrees roll to one side quickly followed by a couple of degrees roll on the other side, as a kind of “goodbye” or “thank you” symbol. It’s very cool to watch, especially since Everett builds the bigger Boeings: Dreamliner, 767, and 747.

This particular Cargolux 747-8 was just freshly delivered to the company and is rolling down the runway to head on it’s voyage to it’s new home. Once the pilots get a little altitude underneath them, they perform a wing wave that has to be seen to be believed. The roll to the left was impressive enough but the roll to the right sends the plane dramatically over. The 747 was completely unloaded and had plenty of power on hand but as more of a 747’s wing goes vertical the less they lift. One has to wonder if anyone from Boeing stopped breathing for a few seconds while the pilots were saying goodbye.

Best of 2014: Watch The Most Horrendous Doorslammer Wreck We Have Ever Seen Anyone Survive - Jerry Yeoman At Wichita International Raceway Best of 2014: Awesome Video: A GM Truck Folds In Half Like A Wet Cardboard Box