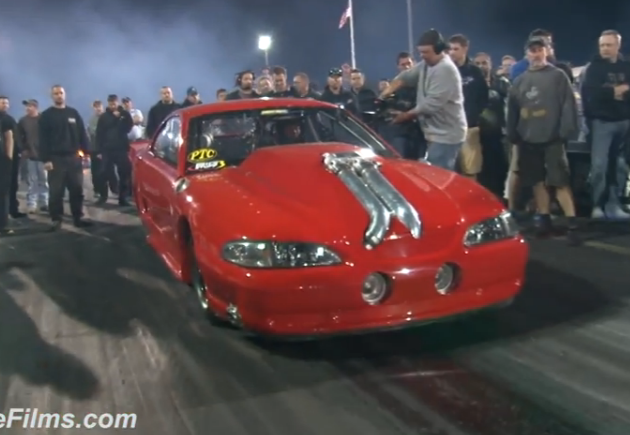 First off WARNING – THERE IS SOME STRONG LANGUAGE AND SWEARING AT THE END OF THIS VIDEO — IF THIS IS A PROBLEM, STOP IT IMMEDIATELY AFTER YOU WATCH THE RUN.

This is the most incredible radial pass in drag racing history and it was made by Kevin Mullins in his 1997 Mustang which is powered by a 521ci Hemi with twin turbochargers. This engine is estimated to make some 4,000hp and who the heck are we to argue with that? The run was made during the Lights Out V race at South Georgia Motorsports Park in Valdosta, GA during qualifying for the events’s Drag Radial VS The World class. It sent a shock wave around the internet, drag racing, and it certainly got our attention!

In related news, Donald “Duck” Long threw out a $10,000 challenge for anyone willing to take on Mullins head to head running a 10.5 inch slick at any weight. Mullins would be on his radial tires, of course. Once the offer was thrown out there, it did not take long for one racer to step up and answer the bell. That racer is Texas legend Frankie “Mad Man” Taylor who will be taking on Mullins at the September No Mercy race at SGMP which Long also promotes. This should be titanic and it’ll certainly be a good promotional tool for Long to help hype up the race.

Believe it or not Mullins actually backed up the 4.11/193 pass you will see here with a 4.11/194 pass made after this was taped. He had expressed a desire to try and get the car into the 4.0 range but that didn’t happen. We don’t think it will be long before he does it, though. Lastly, watch the car launch and accelerate. It literally leaves the starting line like a school bus and you can virtually hear the power being poured on as the car gets further down the eighth mile course. It is incredible what modern technology has allowed small tire racers to accomplish and this run is proof of that.

AGAIN – WARNING – THERE IS SOME STRONG LANGUAGE AND SWEARING AT THE END OF THIS VIDEO — IF THIS IS A PROBLEM, STOP IT IMMEDIATELY AFTER YOU WATCH THE RUN.

PRESS PLAY TO SEE THE RUN!

UPDATE: Fox Reports Jimmy Johnson Wins 2014 Daytona 500 After Running 2013 Daytona 500 Replay On Own Network -- ESPN Botches It As Well! Near Miss Video: Greatest Save Ever or Luckiest Guy Ever?