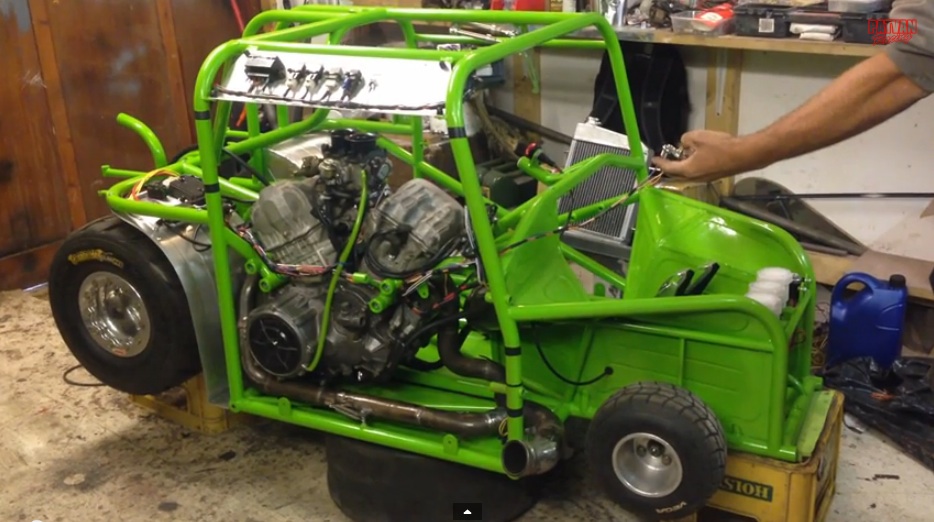 We reported that the Postman Pat van crashed over in England and that the guys who built it were going to come back with an even better and faster model. Well, here’s our first glimpse of the new Postman Pat van (sans body) being fired up in the shop. There’s a bunch of cool stuff here and we’re going to start with the engine. The V-Twin mill comes from a very rare (only 200 produced) Aprilia RSV 1000R motorcycle. Built by Rotax, it makes 141hp, which is a bunch more than the boys had with their old setup. The engine is set where the “passenger” seat would be in a normal sized car. It still strikes us a nuts that a grown man fits inside this contraption!

The tire combo is looking more “big-n-little” than it did before, which is neat and the whole chassis seems to be more like a scaled down drag car than a beefed up go-kart style piece. The engine sounds fine idling and it really sounds peeved when the it gets revved up. It displaces 998cc and redlines at 10,000 RPM so when this thing is heading down the track and the driver is jamming through the gears, it’ll be sining a really high pitched song!

We’re not sure what the elapsed time goals are for this iteration of the van but with that engine and what we have to believe it reduced weight and perhaps better hook, the thing could really start to make some numbers. The motorcycle equipped with this engine runs deep into the 10s, so here’s to hoping the van is somewhere in that neighborhood. We’re pumped that the boys decided to not only fix the van but actually improve it. The could have chocked the whole thing up to a fun time and moved onto other stuff but they didn’t. This thing is their calling cars and now they are improving the program. How about that!

Caption This: In Seriously Deep....Mud. Guys, Can I Get Some Help Out Here? More News On Payload Ratings: GM Goes For The Mea Culpa, Ford Doesn't Budge