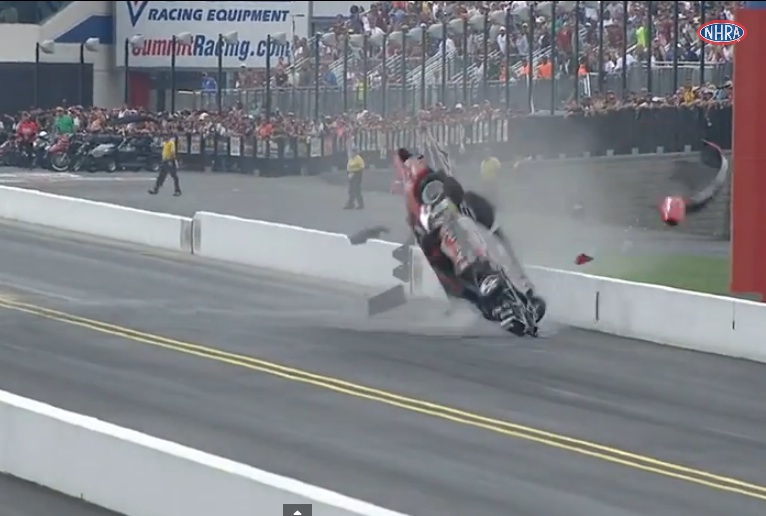 NHRA Pro Stock racer V. Gaines suffered a massive top end crash yesterday at the NHRA Pep Boys Nationals when his car got loose on the top end of the track and turned over multiple times before landing on the wheels. We’re happy to report that Gaines is OK and walked away from the scary looking wreck. The funny thing is that his car was the most controlled of the two that were heading down course as Allen Johnson’s Dart got loose and wiped out a timing block in the middle of the track early in his run before Gaines showed any signs of trouble.

As you know, pro stock cars make virtually no downforce and because of that fact can become a real nightmare on the top end of the track when things are not going perfectly. This was the case with Gaines as he tried valiantly to drive his car but with nothing to keep the rear tires stuck to the track, he was fighting a losing battle. As we have sean countless times in pro stock crashes, once the air gets to work under the car, the driver becomes a mere passenger for what’s to come. In the case of this crash it was multiple bone jarring rolls into the shutdown area at zMax Dragway in Concord, North Carolina.

Due to the amazingly high quality oft he construction of these cars, the integrity of the cage and all of the other safety equipment was never compromised during the wreck. Gaines climbed out under his own power and will be fine. After this crash and more weather, the NHRA decided to cease racing at zMax and will complete the lingering rounds at subsequent races. Next weekend the tour rolls to Texas and the turn is very tight for the teams. Holding for another day may create larger issues for teams so NHRA will continue with their schedule as planned. Gaines won the round and will be able to use a new car in Dallas to compete.