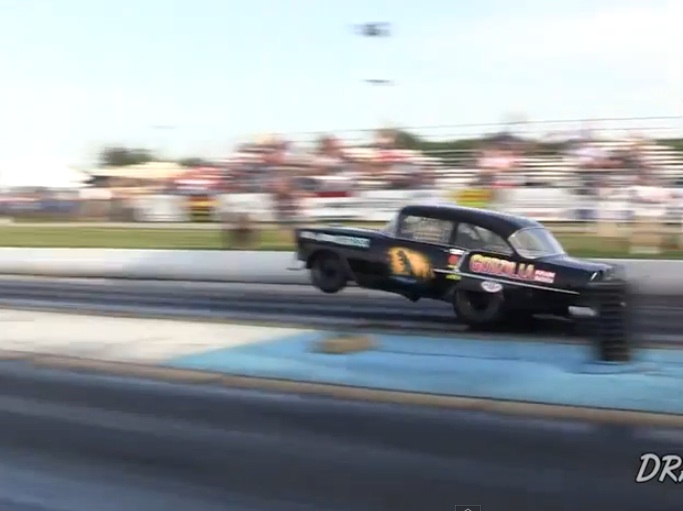 When Dawn-Mazi Hovsepian dropped me a line and directed my limited attention span toward the video you’ll see below, I watched with a smile as one of the most well known, hardest run, and plain awesome 1955 Chevrolets in drag racing history made a run at the recent Gasser Reunion at Thompson Raceway Park in Ohio. Sure, the thing runs 6.33, which is not that impressive but before you write this off as some sort of parade lap, you need to know the basic history behind Nick and Joanne Iarussi Godzilla ’55 Chevy. I have to give credit where it is due on this one because I knew a scratch of the surface behind this car and Bret Kepner rode to my rescue when I needed to fill in the rest of the holes. If there is a car with a more varied history than this one, please tell us because we don’t think that there is.

The racing life of the car began in the early 1960s, the specific year we’re not sure but in general terms, Nick has been racing the same car for 50 years. Few, and we mean VERY FEW can make that claim in the sport of drag racing. Ben Wenzel, who bought a 1967 Z/28 brand new and started racing it from day one still competes in that car today which is coming up on 50 years, but Nick will get there first. Anyway, Godzilla began life as a gasser in the early 1960s and then morphed into an altered when the rear axle was moved forward. It then became a fuel burning altered when nitro was added to the fuel system of the injected big block Chevy engine that powered the car at the time. It then became a wheelstander because when the nitro was added to the tank the thing would carry the front end until Nick told it to stop. After a couple years of fun being part of the exhibition world and getting booked into strips, the nitro went away and the car ran in gas classes into the 1970s. Then a funny thing happened. A class called Pro Gas was created out west and it became a big hit. Said class was replicated by eastern strips and at the time it was super wild, exciting stuff. Why? Because these cars were competing on a 9,90 index! Yes, Pro Gas was the father of Super Gas and it was nothing like the throttle stop games of today.

In the late 1970s, it was really something to have a 9-second door slammer and with the index being 9.90, you needed one that would really get there and it wasn’t like nine second cars were growing on trees at that point in time. Nick immediately embraced the class and became a force to be reckoned with in it. He would drive that car to at least one national Pro Gas championship. We’re not sure what he has been doing it from then until now but it is obviously in running condition and it like to pull wheelies just like the old days. From gasser to altered, to nitro altered, to wheelstander, to gasser, to Pro Gas national champion winning car. How’s that for some flipping history!

Lastly, there are times when a run needs to be judged my lots more than the elapsed time. The fact that people young and old got to see this car with the original driver make a run at a track that it made so many at over the years is really neat. If you have any appreciation for the history of quarter mile competition, this one will leave you smiling.