Watch One Of The Most Valiant Drag Race Driving Efforts We Have Ever Seen – Sideways, Stuck Throttle(?), Almost Saves It Completely 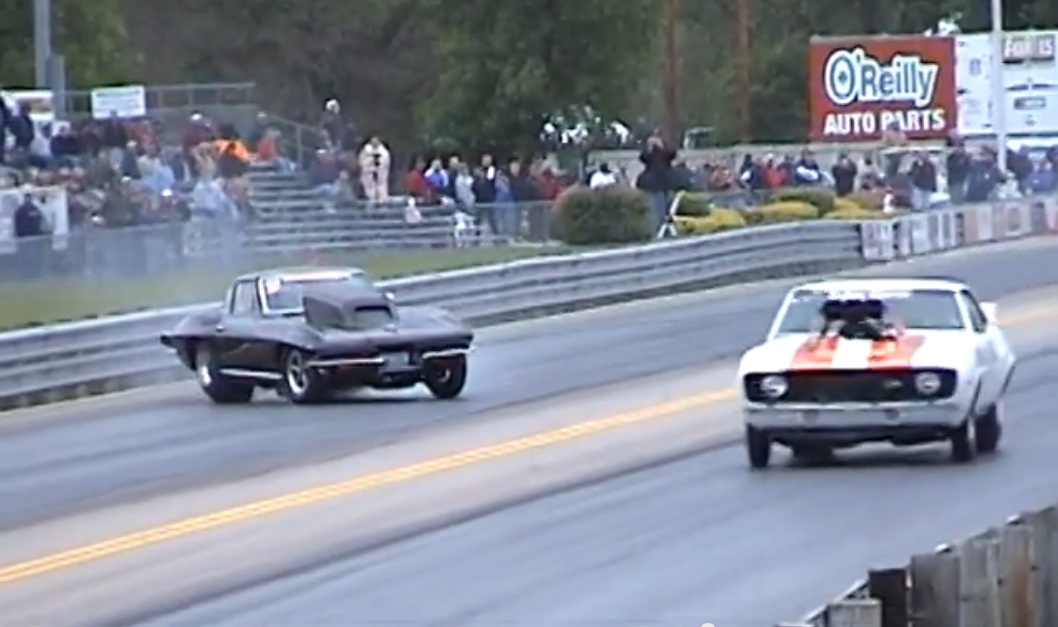 To be fair, we consider this a save. Yeah, the guy scraped the wall but when you watch this video and see how bad it could have been, that wall scrape is a drop in the bucket, literally. We’re sure the car owner was pissed at the time, but on multiple occasions during this run, the driver was looking complete destruction and potentially serious injury in the face. The car in question is (obviously) the Corvette seen above, completely sideways about 200 feet down the drag strip. The guy in the Camaro is essentially running for his life to get away from the wayward C2 ‘Vette.

This is one of those runs that does not go according to the plan right from the hit of the throttle for the Corvette guy. He tries to get the thing settled down which only results in the situation you see here with the car trying to go east-west on a north-south drag strip. Believe it or not, he prevents a head on collision with the wall and gets the car heading in the right general direction when the throttle either hangs open on him or the driver mashes it instead of the brakes. We’re not sure what the deal is there, but by the sounds of it, the thing went right to the carpet because the revs come up, the car shoots across the track again and at that point the guy just runs out of room to prevent contact.

The driver’s side of the car scrapes the wall  but again, in the scope of what could have happened it is small potatoes. We know that “he should have lifted” will be the refrain from this one, but wow. The guy worked his backside off behind the wheel to save himself and his car. The car is admittedly awesome From the stance to the sound, we would have loved to have seen it on a clean rip down the track!

PRESS PLAY BELOW TO SEE ONE OF THE HARDEST CORE DRAG RACING DRIVING JOBS YOU’LL EVER WATCH – HE ALMOST SAVES IT!

This Remote-Controlled Concorde Is Just Awesome, Jet Engines And All Great Read: How An Old Willys Jeep Has Taken A Family Through 60 Years Of Fun And Adventure

11 thoughts on “Watch One Of The Most Valiant Drag Race Driving Efforts We Have Ever Seen – Sideways, Stuck Throttle(?), Almost Saves It Completely”