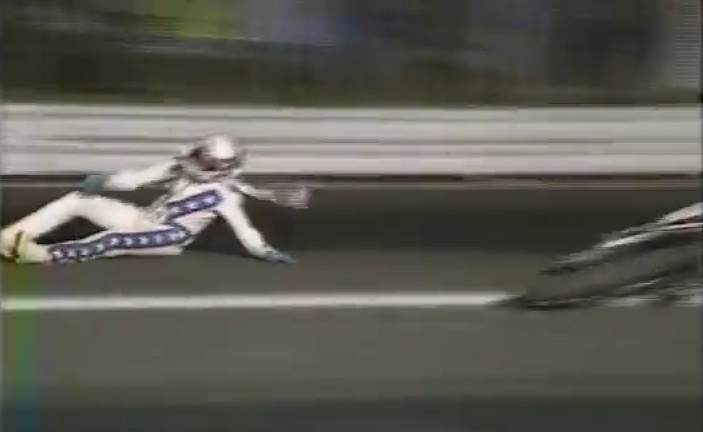 Motorcycle jumping is a tough business. On a good night you are an absolute hero that must feel as though walking on water is a given. On a bad night you are flying through the air, knowing that the end of your life is a distinct possibility as you plummet from the sky onto the unforgiving pavement. Such was the case for Robbie Knievel at Atco Dragway in 1991. He was appearing at the strip to jump over a bunch of cars as part of a “night of thrills” type promotion. Knievel is (as you know) the son of legendary Evel Knievel who rose to superstardom in the 1970s jumping motorcycles and supposedly breaking every bone in his body at least once during his career. Like motorcycle jumps, both men experienced a career arc. Evel’s rise and fall were nearly vertical. From obscurity to international fame and from that level back down again in a hurry. While Robbie never made the same level his dad had, the guy made a living for decades jumping bikes and did so at locations across the world,

On this night, Robbie was supposed to leap over these cars, pull his hands off the handlebars, and then land in front of the adoring crow. The launch was not the problem but something happened right after that and judging by his body language on the motorcycle, Knievel knew he was in trouble. The motorcycle landed very near the end of the ramp and the rebound from the landing launched Knievel right off and onto the hard pavement at Atco. Skidding on his leathers, Robbie ends up near the starting line of the strip. Obviously he survived but the extent of his injuries are not detailed in this report.

Having the guts to do this for a living is pretty much unfathomable to us. Cranking the throttle open and heading up that ramp must be a feeling that cannot be described. On the flip side, flying through the air and essentially knowing that you are in trouble has to be more sickening than anything we can imagine. This was a tough night to be Robbie Knievel.