Watch The 3,000hp, All Steel, 1963 Dodge Known As Bad Judgement Clean House At King Of The Streets 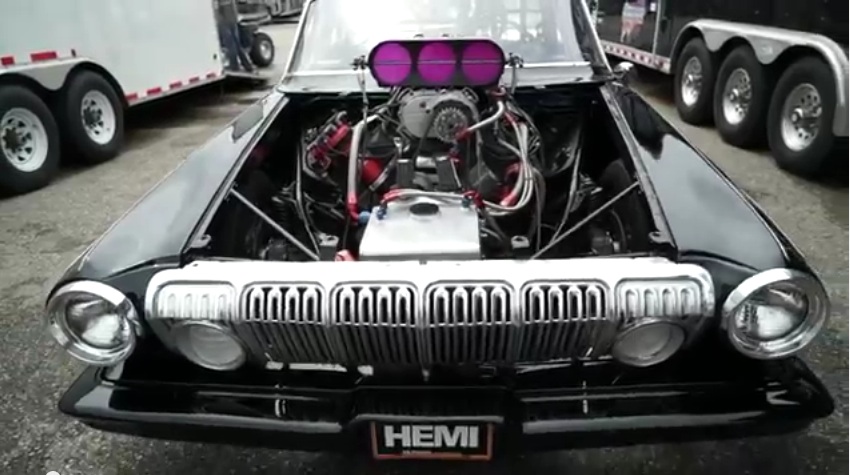 The King of the Streets event at Great Lakes Dragaway had an unlimited class for the first time last weekend and that meant that some big tire, huge horsepower cars showed up to take on the unprepped track and each other. The monster that won the Unlimited class was a 1963 Dodge powered by a 526ci supercharged, alcohol burning hemi known as Bad Judgement. What is essentially a pro mod engine wrapped in a classic steel body and backed with a Lenco sounds damned good in this video and it just ate up everything that got into the lane next to it. Because this is a clocks off affair, we have no idea what the thing actually ran but it was hauling along pretty good out there. The boys were so amped up at the end of the video they want to head to Oklahoma and give the Street Outlaws fellows a run for their money. Think they have a shot?

The car has some nice details and our favorite is the addition of the classic “air grabber” decals to the sides of the injector hat. Those are greatness on there and a nod to the Chrysler heritage of the car. There are certainly lighter ways to go but we love cars that are steel and can still get it done. Even at 3,300lbs, this thing is a honker and it laid out cars that were far lighter in the other lane. The driver says that the thing will get down a gravel road in the beginning of the video and by the end we’re believing his words. This thing was setup perfectly for the no-prep conditions that it saw at Great Lakes and it shows in a couple of the elimination runs when competitors lost traction and this baby motored away.

One of the neatest cars we have seen in a while!

PRESS PLAY BELOW TO SEE THIS HEMI HULK WRECK THE COMPETITION –

King Of The Streets 2015: Pit Photos From The Showdown At Great Lakes Dragaway Check Out The Footage From The Windrock ORV Bounty Hill: Carnage And Crashes

3 thoughts on “Watch The 3,000hp, All Steel, 1963 Dodge Known As Bad Judgement Clean House At King Of The Streets”