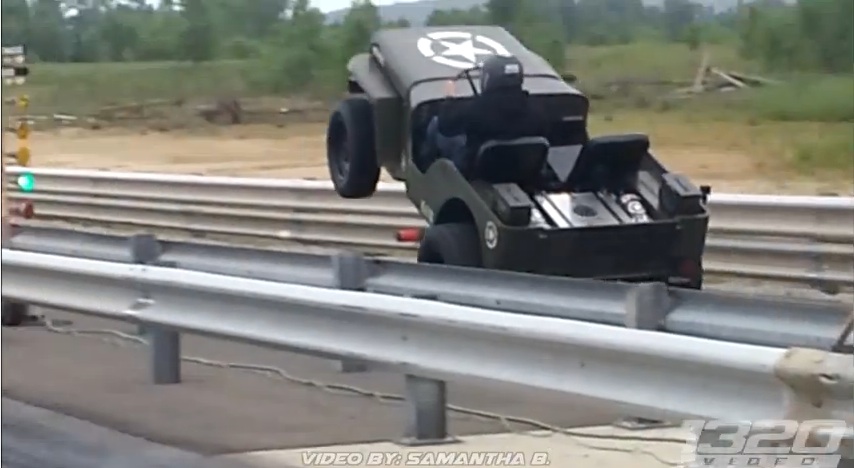 The LSx Willys is famed for the fact that it may be the most overpowered vehicle ever. With the addition of a ProCharger D1, nitrous, and DIY Autotune controlled EFI, the 4.8L thing is officially capable of performing feats that Willys engineers could never have imaged their tough little bugger of a truck doing. Some video has emerged from the drags that shows the infamous Jeep pulling a massive wheelstand and bouncing back to Earth while running a low 7-second pass in the eighth mile. The thing will go lots faster but the driver had to lift for obvious reasons that you will see in the video.

The truly crazy thing here? There’s no roll bar in the thing. We know, we know. The world is overly obsessed with safety and we’re just wuss-bags for suggesting that some chomemoly tubing (even just a four pointer!) above the driver’s head would be a good idea. For obvious reasons, the Jeep does not see the track all that much, due to the fact that it largely won’t get through tech at most places. Bonne Terre Drag Strip in Missouri was OK with the Jeep running as it sat so they sent it to the starting line and watched it put on a show. The Bonne Terre track was a sand drag racing facility that was recently paved as to give the state another strip. It is unsanctioned.

We’re believers in personal responsibility. The dude in the Jeep knows that when he hauls down the track in that thing he’s taking his life into his hands. The track knows as well. Actually everyone with an IQ higher than 7 knows that if something were to happen in the current configuration, it would curtains for the driver. In this case, the strategically placed bumper stopped the Willys from pitching over backwards and squashing the driver like a grape. Would we do this? Hell no. Is it fun to watch someone else do it? Hell YES!

Someone Swapped A 468ci Big Block Chevy Into A 2005 Kia Sorrento - Factory Looking Install BangShift Top 11: Which Songs Go With Which Roadkill Vehicles

7 thoughts on “Watch the LSx Willys Pull A Massive Bumper Standing Wheelie – No Roll Bar, No Hope Of Survival, Nuts!”