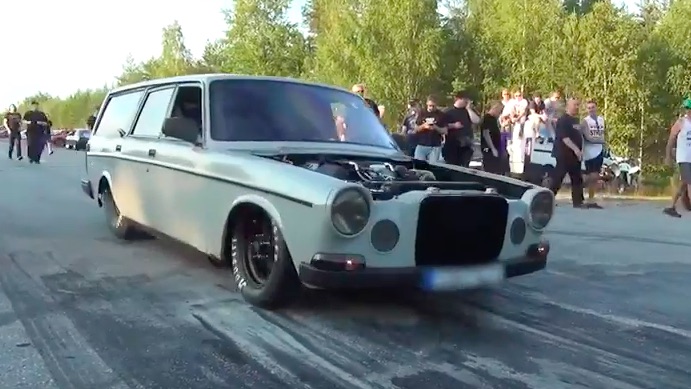 With an old style nose bolted onto a later styled body, this Volvo wagon looks beyond bad ass tucking all of that tire up under it. The guys at 1320Video shot this car when they were visiting Sweden and they were rightfully impressed. The engine is an LS7 with a single 88mm turbo on it and the thing makes enough power to completely dominate the race you will see it competing in below. It takes on all different types and styles of cars, kicking their asses all the way down the track on multiple occasions.

It is always cool to look into the car culture of another country, especially one as hardcore as the Swedes. These guys certainly know how to throw down and the video here is proof. We also enjoyed the fact that there were some weirdo European bodied cars we did not recognize and a bunch of first generation Camaros. Those cars we certainly did recognize.

This car is clearly pulling the front end on a relatively unprepped surface located somewhere out in the woods and that’s a testament to the chassis and the tuning that has been done with the machine. The big single may be a little softer down low than two smaller twins that would spool faster but once that big woodchipper gets to spinning, the late model LS7 is making massive power and traction is no longer a critical issue because the whole works is accelerating down the track.

We’re going to go ahead and place our stamp of “most bad ass Volvo wagon on Earth” to the image of this square monster!

Yeah, That Seems Safe: Who Wants A 450 Horsepower Geo Metro? Money No Object: This 1976 Ford Falcon Has Us Seeing All Sorts Of Blue - Ford Blue, Grabber Blue, "That's A Cop" Blue...