Watch This Real Lambo With LS1 Power From Australia Dip Into The 9s! 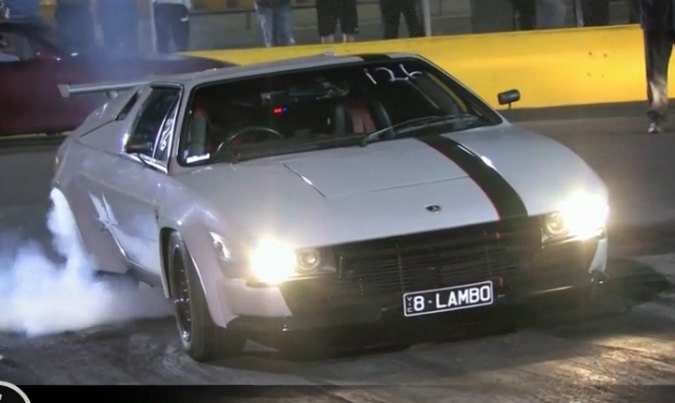 The first thing we did after seeing this 9-second run made by the LS1 powered Lambo Jalpa in the video below was look up what the heck a Lamborghini Jalpa was. Honestly had no idea. It looked like a shrunken Countach and it turns out that we were partially right about that. You see, back in the 1980s, Lambo was looking for a lower cost, higher volume selling car to add to their lineup. They went to the same guys who did the design work on the Countach and the car they came up with was a V8 powered machine called a Jalpa. In the span of about six years, 400 of them were sold. While not the most valuable Lambos, they are still worth some dough to collectors and enthusiasts so that is why we’re even more enamored with the hot rodded Jalpa you’ll see in the video below.

Rather than futz with the 3.5L V8 that came stock in the car, the dude who owns this one went for the swappiest engine of all time and plugged it into the Jalpa mid-ships. He went with a Toyota transaxle (automatic) to transfer the power to the drive wheels and judging by the looks of this video, the plan was a great one because the rig hauls tail and looks fantastic. You’ll see the first run clock in the 11-second bracket with some popping and banging but the second run is a thing of beauty. The car comes off the line nicely and motors down the track perfectly, stopping the clock before it was able to reach 10.00.

For the guys who claim that people are putting LS engines into “everything”, here’s your proof.

Watch A Large Ferry Thread The Needle Between Two Ships And Get Run Aground On Purpose At A Wrecking Yard In Turkey Wondering What's Up With The Sinkhole Corvettes? Find Out Here

12 thoughts on “Watch This Real Lambo With LS1 Power From Australia Dip Into The 9s!”