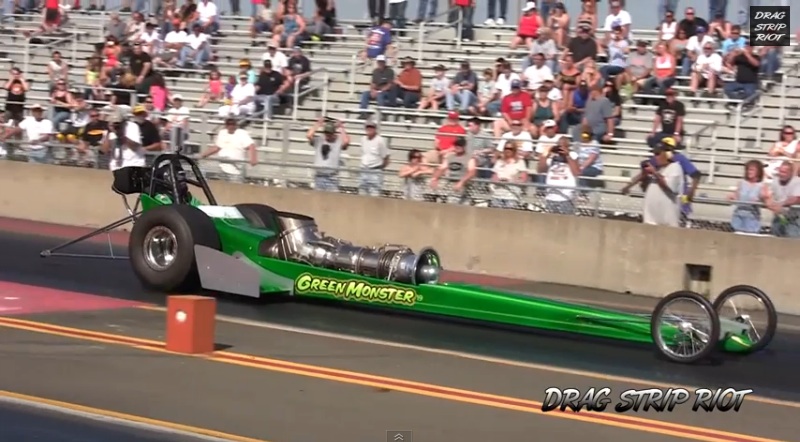 We’ve showed you video of Tim Arfons’ awesome recreation of the Green Monster front engine turbine dragster that he debuted last year before but this is the first one we have seen in 2014 and it is cool because Tim has added a new wrinkle to his show and that’s a giant vertical column of flame that he fires off before ripping down the drag strip. The car appeared at Quaker City Dragway in Ohio last weekend and this is where the new fire deal was given a public debut. To steal the name of a famed oil well fire in the 1960s we’re calling this new flame deal, “The Devil’s Cigarette Lighter”. What’s important to remember here is that this car is actually wheel driven. This is not a “jet car” per se as the turbine is spinning a shaft which is driving the rear tires. Thrust is not providing the motivation for this craft.

Since Tim keeps an insanely busy schedule as a contractor with NASCAR and other racing organizations to provide track drying equipment and support, the car doesn’t get out super often and when it does the appearances tend to be local to his Akron, Ohio base of operations. The simple fact that Tim went all the way and recreated this car from his family’s storied past is pretty flipping awesome. The natural showman in him shines through with the addition of the fire part of the program and we’re still keeping our fingers crossed for the day when we get to see it run in person. We think you’ll dig this video.

Mr. Bean Helped Save A Rich American Guy Who Wrecked His McLaren F1 In Italy RideTech's USCA Daytona Weekend Was Awesome - See How The Cars Performed, How They Thrashed To Fix Carnage, and More!