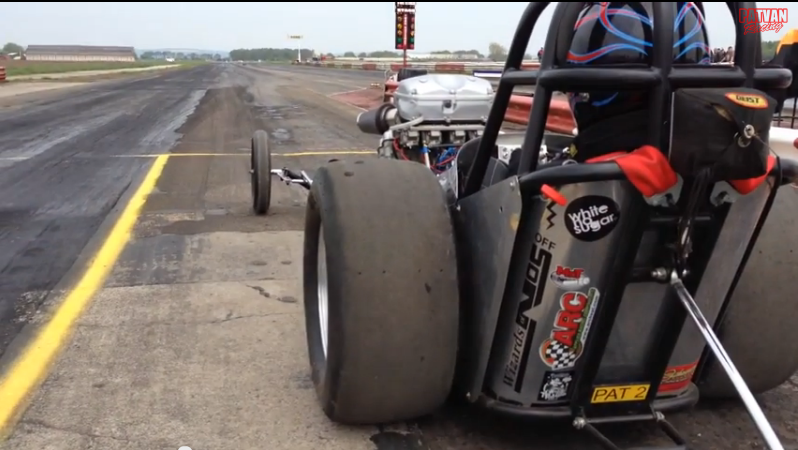 We’ve been showing you the cool vehicles dreamed up over in England by Tom Armitage and his band of henchmen. They are they are the guys who turned a Postman Pat shopping center ride into a drag race car and over the last year and change the guys constructed a tiny slingshot dragster with a four banger motorcycle engine mounted up front. The engine is equipped with a split pair of headers that look and sound fantastic and up until we were tipped off to this video, we knew it ran OK and was a lot of fun. We’re upgrading the “runs OK” part to “flipping flies”!

These videos show Tom Armitage at the controls, running a bunch of 10-second quarter mile passes at York Raceway in England. These are not simple straight ahead runs, no. These are sideways, wild, hang on tight and wrangle the car down the track laps at York. As you’ll see, getting the thing off the starting line is a challenge. The car runs on very small slicks and they seem to dead hook and lug the motor down pretty hard (while simultaneously yanking the front end up!) on the launch and we’re guessing that earlier attempts at getting aggressive with the car resulted in big tire spin so this is the alternative to that. While we’re not sure we’d fit in the cockpit, we want to drive this mean little monster badly.

Does anyone else think that this car could serve as a brilliant and fun new class in drag racing? They built it for decently short money, it runs 10s at nearly 130mph, and the dragster acts more like a classic slingshot than any modern built slingshot we have seen lately. Between having the front end up and the track crossing attitude, it just looks neater than hell sitting there because it is so small. Eight of these cars would put on a fantastic exhibition, no question.

We’re going to follow up with Tom to get some time slips and more data, but until then you have to check out this video and see what the little slingshot is all about. Would you drive it? WE WOULD!

PRESS PLAY BELOW TO SEE THE WORLD’S COOLEST (AND ONLY?) MINIATURE MOTORCYCLE POWERED SLINGSHOT –

More Cruise Photos From The Auburn Elks Cruise - Hot Rods And Muscle Cars Fill The Grounds This 1972 Charger Is Powered By A Caterpillar Gas Turbine And It Is For Sale...In Sweden