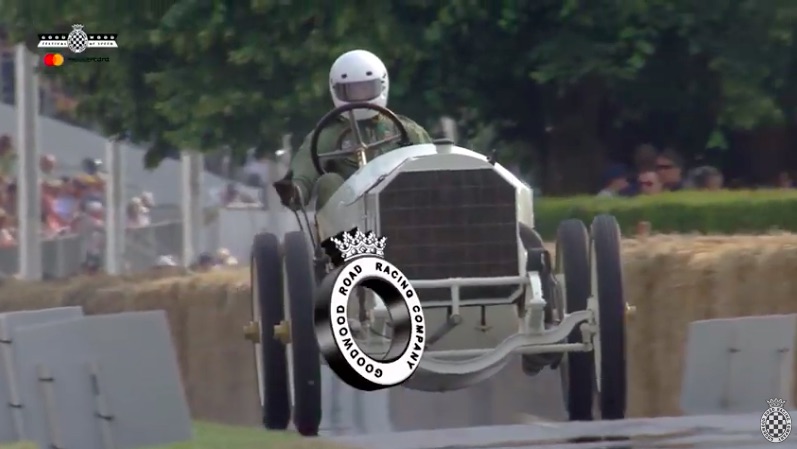 There’s just something awesome about seeing a guy like Ben Collings take the stick to a 101-year old car and give it hell on the course at Goodwood. The machine in this case is a 140hp Mercedes Grand Prix that was about as cutting edge as the space shuttle was when it first came out. The engine is a 12.8L four banger that is hooked to a four speed manual transmission, sending the power to the rear axle via chain drive . It’s the type of machine that killed a lot of guys more than 100 years go. We’re not saying this car specifically, just the era of racing and the crude nature of these giant machines.

As we watch Collings wrangle this car up the course, we can’t help but wonder if it is easier to drive an old car in a modern era of if it was easier to drive this car when it was new. A weird thought but consider it. When the car was new, no one knew any better. This was cutting edge, it was fast as hell, and it represented the best that any company could make. The limits of driving competitively had not been touched or even considered yet. Effectively, back then people didn’t know what they didn’t know.

Fast forward to today. You have a guy who clearly understands what it is like to race a modern, competitive car and knows every one of the limitations that this old beast presents. Like EJ Potter once said, “Ignorance is a powerful took, sometimes surpassing knowledge.” The old guys were super ignorant and Ben Collings isn’t which makes his drive here all the more impressive. He knows this thing is a speedy old tractor and still drives it as hard as it will go!

Smoked: This New Documentary Podcast Series About The Rise And Fall Of IMSA and Indy Racer Randy Lanier Rules Neck Braces For Everybody: The Hoonigans Meet The AWD Hurst/Olds