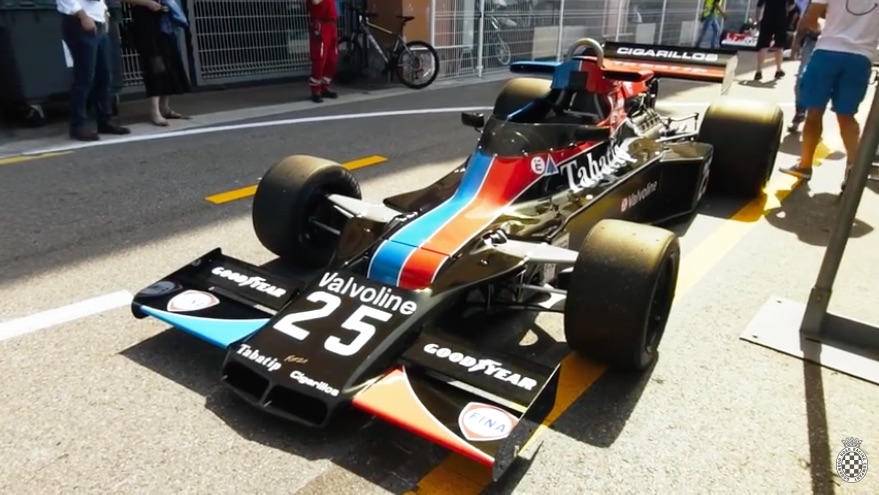 The Shadow team of the 1970s had some kick ass cars underneath them. From their crazy Can-Am builds to machines like this awesome Shadown DN5B F1 car, these guys knew how to party. They also knew how to be fast. The design of car you see below was used in the 1975 season, updated for 1976, and actually had a bit of staying power into 1977. That was a pretty long lifespan for a racer of this caliber in those days.

The car never won a race but had multiple top three finishes and was proven to be fast as it was a number one qualifier multiple times as well. Using a Cosworth DFV engine and Hewland gear box the cars had similar mechanical pieces to many of their competitors so the chassis and suspension design were where any advantages were given to a driver. In this case a wonderful monocoque design was used (as were most of the cars of that period) and as you’ll see in the video, the car is nearly more beautiful with the body off than it is with the body on.

Shadow has UOP (Universal Oil Products) as their major sponsor through the Can-Am years and into the Formula One years. In the 1975/76 time frame that company withdrew their sponsorship as because race teams run on money more than gasoline or alcohol, the Shadow basically peaked at this moment in its design.

We think the F1 cars of the 70s are 100% more appealing looking than today’s. Oh, and give us that mighty, screaming Cosworth any day!

Flying Turkeys: What Could Be Better Than Jumping Beaters In The Desert? Moist Turkey: Rooster Tails And Race Cars From The Imola Classic!

One thought on “Sexy Turkey: Check Out This Awesome 1970s Shadow DN5B F1 Car At Monaco”