The 1983 Subaru Turbo Traction Wagon Was Kind Of A Dinosaur, Slow, WRX…Or Not 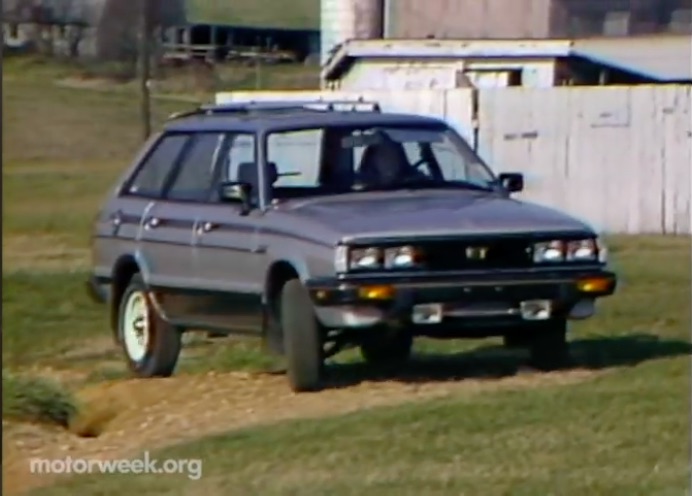 Vaping jokes aside, we think that Subaru makes some pretty decent cars there days. The WRX and their other turbocharged sport offerings have enough guts to be fun, they have a large enthusiast community behind them, and we have hammered a few of them at the strip to the point of giddiness. Back in 1983 though, this was not a sporting brand in the traditional sense. They made a load of weird cars, weird for the time, and actually weird for this look back decades later. This Motor Week feature on the 1983 Subaru Turbo Traction wagon is a honest period look at a car that many people did not know what to make of but owners loved. We say that because a neighbor of ours growing up had one and the little tank-like Subie was loyal to them until it basically rusted in half.

With a turbocharged engine making scantly more than 90hp, 8-inches of ground clearance, “on demand” four wheel drive, and the styling creativity of the Berlin Wall, this was a car you found not a car that found you. They were sold in strong numbers in New England (still Subaru’s largest market in the USA) and for good reason. They dealt with the winters well, got better economy than a truck, and in 1983 people still were not buying trucks as luxuriant daily transportation.

One of the things that really took us back while watching this was seeing the interior footage. This car was about as comfortable as a Latvian prison to spend time in. The thing always got us to school, it sounded different than anything else on the road at that point, but it was brutally bad to ride in. Cramped and uncomfortable, a road trip in one of these would be considered child abuse if you have kids.

We love cars like this, though. It did its job, filled its niche, and eventually gave way to a Subaru that was far more widely seen, accepted, and loved in the mainstream. When’s the last time you actually saw one of these on the road?!

Classic YouTube: Geoff Bodine and Dale Earnhardt Battling At Riverside In 1987 Watch This Twin Turbo, Small-Block Opala Haul Tail And Nearly Jump All Four Off The Ground In Brazil