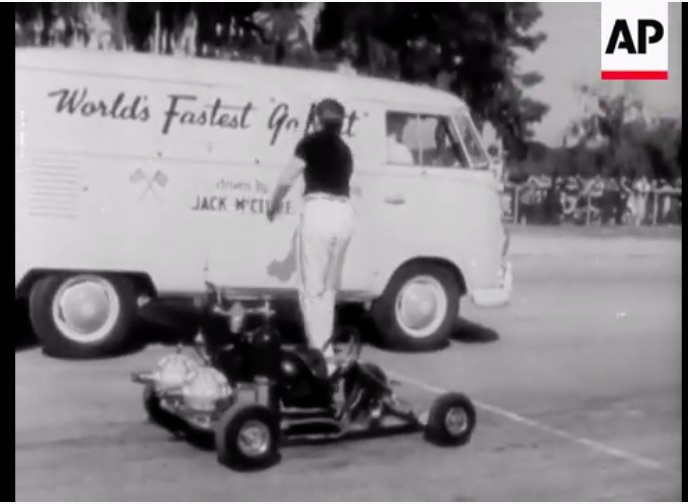 If there is one man in drag racing history that defied death for a prolonged period of time it’s Captain Jack McClure. The guy is among the most brave and awesome dudes we have ever met. Oh, he’s still alive today, living happily into his 9th decade after making a career of racing rocket powered go-karts in the sport of drag racing. He was most famous for his exploits from 1970-73 driving a hydrogen peroxide rocket car to 6-second quarter mile elapsed times and speeds well over 200mph. But everyone starts somewhere and he did not start with that unit. He started his go-kart drag racing career with a go kart that had twin Turbonique rocket karts and for the first time ever, you are going to see it in action with sound!

This video from Tampa Dragway somewhere around 1964 shows McClure and the scary basic kart that carried him to speeds of over 150mph in a freaking short sleeve shirt! Because the thing was a go-kart and not a car itself, he was able to haul it around in a little VW van with the words, “World’s fastest go-kart” scrawled down the side. Powered by two 300lb thrust, “Thermolene” fueled rockets, you are going to get a look at the full monte here.

The two small welding gas style tanks on the back are not even the scariest part of this thing. The chassis was built by the legendary Mickey Rupp and of course Gene Middlebrooks provided the Turbonique rocket engines. This would be Jack’s first stepping stone into the world of exhibition drag racing and it was only quicker and faster from here on up.

This incredible video makes us smile from ear to ear!