2018 KYANA Swap Meet Coverage: The Coolest Cars and Trucks That Were For Sale At The Event 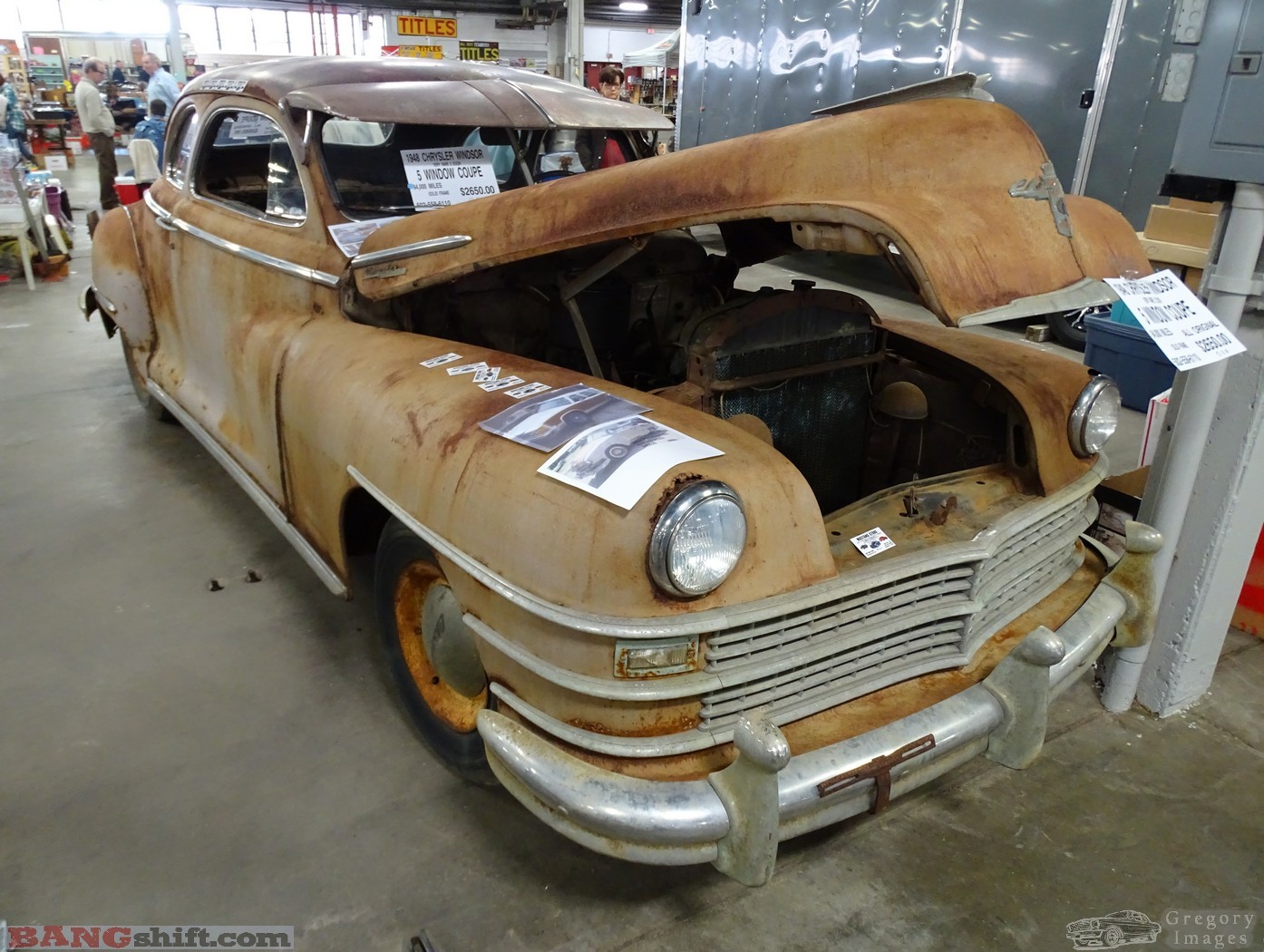 (Photos and words by Doug Gregory) – The KYANA swap meet is held in the Spring and Fall utilizing the Western most portion of the Kentucky Exposition Center.  This includes the Pavilion, Broadbent Arena, West Wing, and a bit more.  There is also one lot outside for cars and vendors.  It’s the largest indoor swap meet I’ve ever been to and you never….ever get through it all if you only go one day.  I set out early with my two and one of their friends for a day of browsing and treasure hunting.  This first gallery is represents the transportation machines in attendance.  I am not going to mention prices much because on the first day of any swap meet….prices are generally high.  Typically as the days and hours pass the price comes down because many vendors don’t want to take their stuff home again.  Lightening the load becomes more important than stretching their profit.  I will bore you all quickly if I discuss the merits and problem of each.  Here are some highlights.

The Hellcat had decent miles and drew lots of lookers….because it’s a hellcat.  The T-top GN looks to have been sitting outside for a long time.  Might clean up, but I’d bet all the seals and such are toast.  The ¾-ton Chevy van would make an awesome tow rig and parts hauler.  The tan, full-time 4wd Chevy Bonanza square-body was cool.  They described it as clean and from the Southwest.  Pretty sure when I read the price I exclaimed ‘they’re on crack’.  Some folks nearby that had already looked at it chuckled.  The green ’69 Chevelle sounded oh so nice when it pulled in and is a three-pedal car.

Now inside we see this copper, Heavy Half C-10 that was extremely clean and low-mile.  Not sure that translates to a $16,000.00 asking price.  Not sure it doesn’t either.  The blue Fairlane hardtop was sweet and a solid driver.  The Landau-topped G-body Malibu was minty and unmolested.  I am not up on what these are worth so the $10k on the windshield might be appropriate.  Red T-top disco Z28 was super nice and appeared nearly stock.  Get some acid-washed jeans and high-tops then you’d be set for cruising.  The green triumph TR8.  These do not grow on trees these days.  Pretty sure they ever did.  I did not see anything terribly wrong with this example.  I’d really like to see what an enterprising gearhead could do with one without altering the appearance much.  The ’54 Ford sedan delivery appeared to be a bargain once we gave it a quick look.  The aqua-green K10 looked amazing.  The right wheels, right stance, and otherwise relatively as delivered from the general.  Not sure what I’d do with it, but I’d have it.

This 1955 Chevy Gasser Speaks To Us And We're Pretty Sure It Speaks To Anyone With Earshot As Well 2018 Amalie Oil NHRA Gatornationals Photo Coverage: From The Strip To The Pits You'll Dig These Images

2 thoughts on “2018 KYANA Swap Meet Coverage: The Coolest Cars and Trucks That Were For Sale At The Event”