Steady As She Goes: The 2020 Honda CR-V All-Wheel-Drive Touring Lacks Surprises, Just What Its Buyers Want 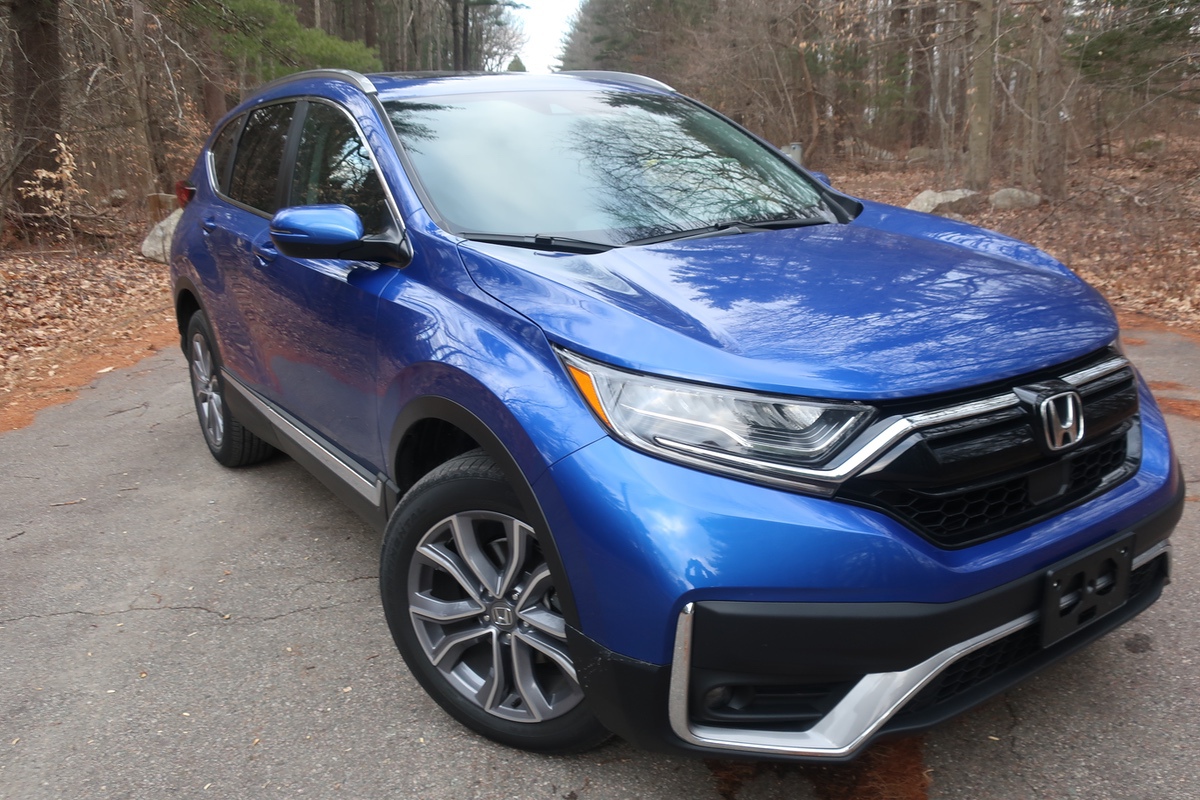 As we have been reporting over the last couple of years, auto manufacturers are dropping sedans and coupes from their product lines because people just are not buying them in volume anymore. Why? Look no further than the 2020 Honda CR-V to see one of the major influencers in this situation. The general car buying public has flocked to these small SUVs in place of the sedans that they were traditionally buying for decades. As machines like the CR-V, which uses the same global small cr platform that the Civic is based on become more car-like in their refinements and their driving dynamics, people became more and more attracted to them. They no not have dawdling performance anymore, they do not have a “truck-like” ride to speak of, and they provide that oh, so sweet “elevated” seating position everyone in the world seems to crave. 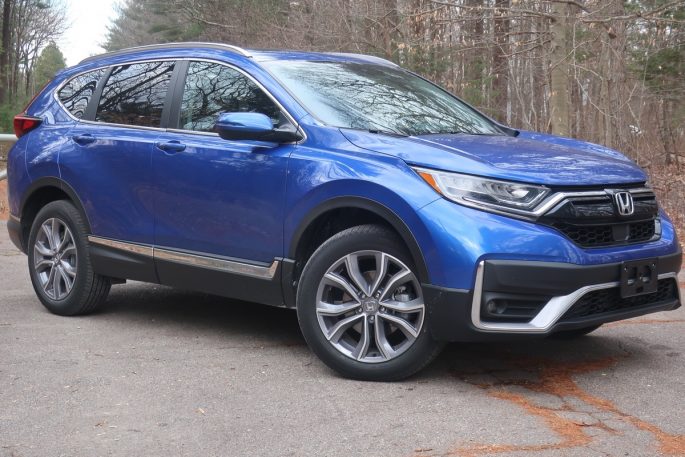 While Banghift readers certainly tend to skew for the performance side of things, you absolutely know and likely live with someone who’d consider buying a vehicle of the CR-V class and style. Most of us are the types that love a good surprise, enjoy the idea that we don’t know what’s happily lurking beyond the next corner of the road or the next twist of the key. We’re the minority. The vast majority of people want a car, truck, or SUV, that they can start up without worry, maintain cheaply, and drive for a long stretch of time for many miles without being shocked, surprised, or snuck-up on by anything. The CR-V has been a massive seller for Honda for just this reason and like all massive sellers, the company needs to keep it fresh and evolving without scaring off the base of buyers that have been supporting the model forever. 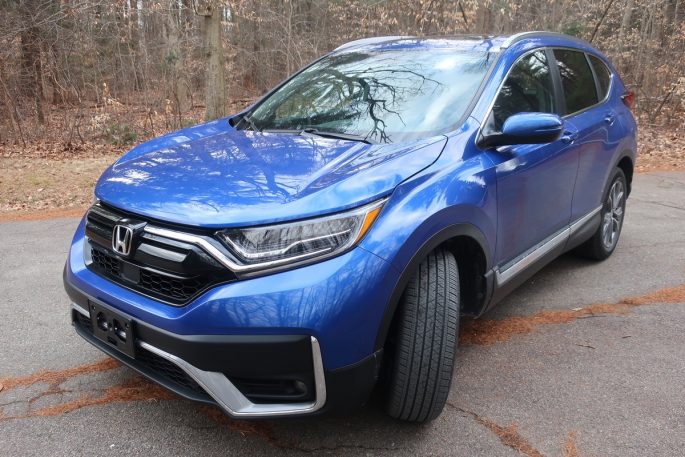 The CR-V you see here is an Aegean blue Touring model with a black leather interior. The Touring trim is the second most expensive choice in the line with the Touring hybrid coming in just north of it. The retail on this example is right in the neighborhood of $34,000. Initially I can tell you that having driven hundreds of cars of the last several years, this one is priced right in the wheelhouse of where it should be. The content is good, you have Honda quality and the level of materials used inside the cabin gives the driver and passenger the feeling that they are definitely sitting in a slightly upmarket rig for whatI consider to be a reasonable price. I’ll get back to the interior shortly. 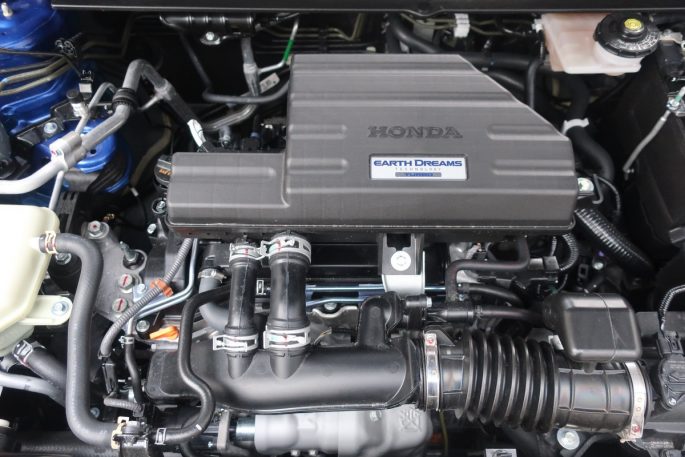 The engine in the CR-V is the 190hp Earth Dreams turbocharged 1.5L four cylinder and it comes hooked to a CVT style transmissions. There’s nothing to complain about regarding power and performance here as the small engine moves the 3,500lb SUV down the road well and when the engine comes up on the 18.5psi of boost it makes, the thing can actually get with the program pretty well. The CR-V can run the quarter mile in 16.7-seconds which, when we compare it to the 17-second performance of the Mitsubishi Starion we showed you on BangShift today, is downright sporting. No, you will never be shocked by the brutish performance of a CR-V but you will also never be underwhelmed or in a position where you are absolutely lacking power (as I have experienced in other, similarly sized SUVs with naturally aspirated four cylinder engines). The CVT is a CVT which means we can never really rank it as a favorite transmission but it is the best CVT I have ever driven and we logged some miles on this Honda. It lacks the jerky action that many have and it finds it spot quickly when the throttle is hammered and acceleration is required right now. Basically, it isn’t the “Honda Motor Company” for nothing. The drivetrain here, including the AWD system is legit. I was able to get 31mpg on the highway during a drive that was 80 miles in either direction. If you are a commuter and need some space, this is solid in my book. 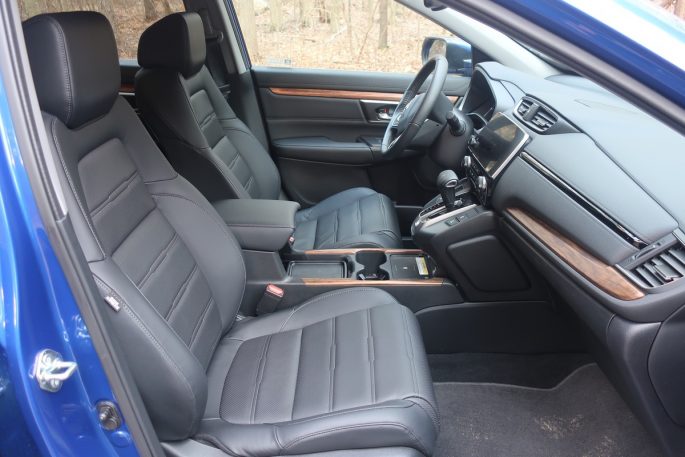 Here’s a peek into the front of the CR-V’s cabin. You can see the included wood accents as part of the Touring trim level, the black leather seats which are OK but certainly not a seat to rave about, and the uncluttered center stack with the shifter for the transmission. Again, this is not a performance vehicle in the sense that the interior is designed to invoke some feelings of being in control of a fighter jet or a tank. Rather this is an interior designed for those with simplicity and ease of you at the front of mind. When I look at cars or in the case, an SUV, I always think it is important to see them for what they are designed to be, not what some think they should be. This is as practical a vehicle as exists today. Is it as good as a sedan in my opinion? I’ll get there in a second. 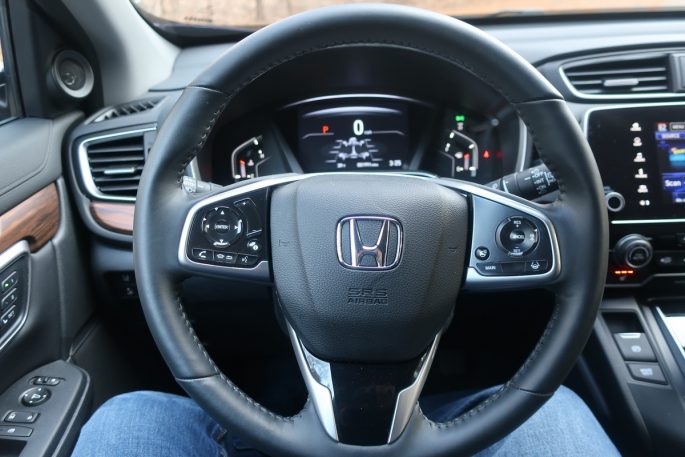 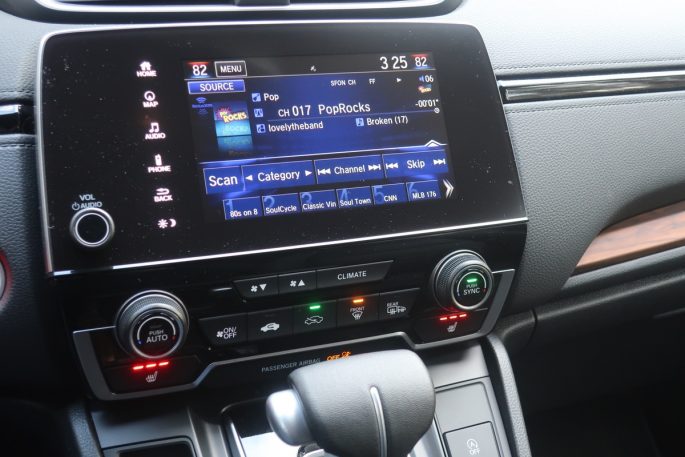 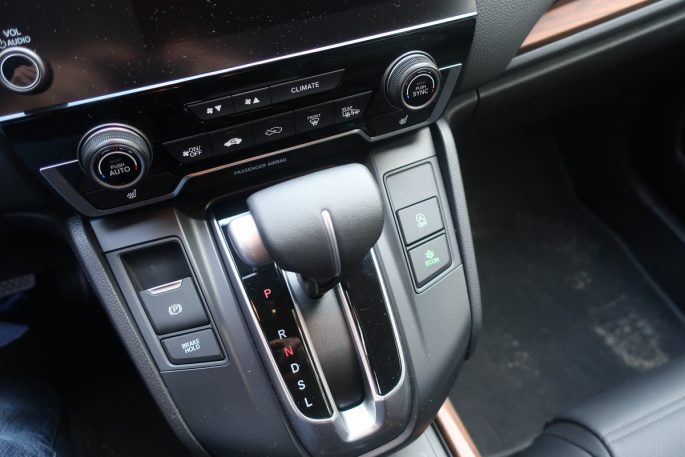 As mentioned the interior is as simply laid out as any I have ever seen. Buttons and controls are easily accessed, they are large for operating with gloves on, and yes, Honda has put the volume knob back on their radios which was gone for a while and was a really annoying thing. If there is one place where this CR-V is lacking it is in the info-tainment system. Of all the places for a technologically advanced company like Honda to be lagging, this is a strange one but they are. It is functional but not good when compared to the rest of the industry. It seems that perhaps an over-abundance of caution was placed on advancing this system and now they are playing catch up. Yes, there is a “Sport” mode one can use and it makes the throttle more crisp and changes the “shift” points of the CVT. 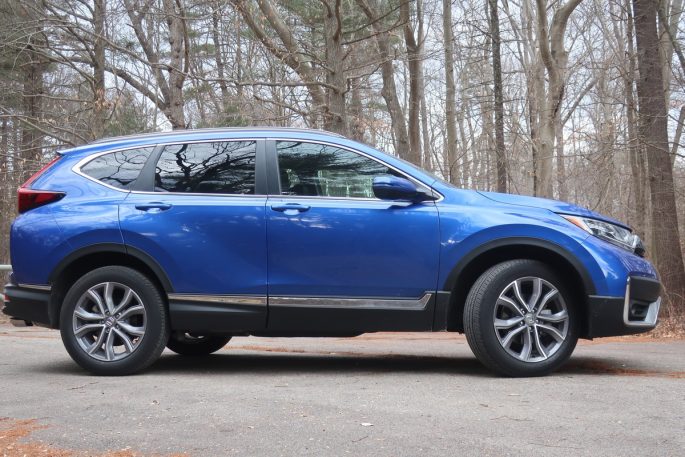 The 19″ wheels on the touring package have 235/55/19 all season radial wrapped around them and they handled the New England roads fine. In terms of driving dynamics, there’s not a whole lot to report here. If you have driven a Civic on the current platform you have a little bit of an idea, you just have to make it slower, heavier, and taller. With the center of gravity coming up, the ability to really bend corners goes down, that is the nature of physics. This is not a clumsy feeling driver. It is just a very sated feeling driver. There’s nothing about the CR-V that makes you WANT to clip and apex or see how quickly you can handle an off-ramp. That is not what this thing is for. Honda makes stuff like that. It’s called the Civic Si and their Acura division makes the NSX. This CR-V is a people mover, a rock solid transporter, something to get it and go places with without having to pay it a lot of attention. In these respects it succeeds with flying colors and does so with a slight grin on its face when you really lean into the little engine. 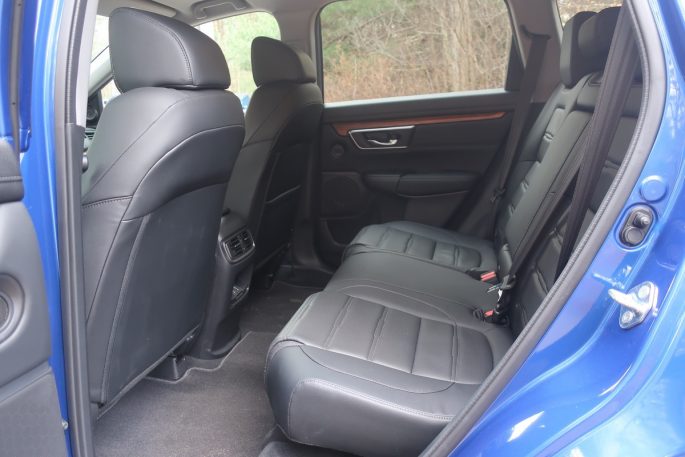 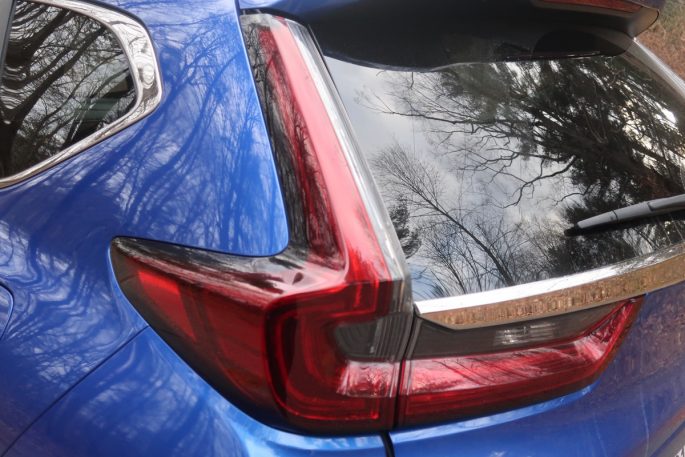 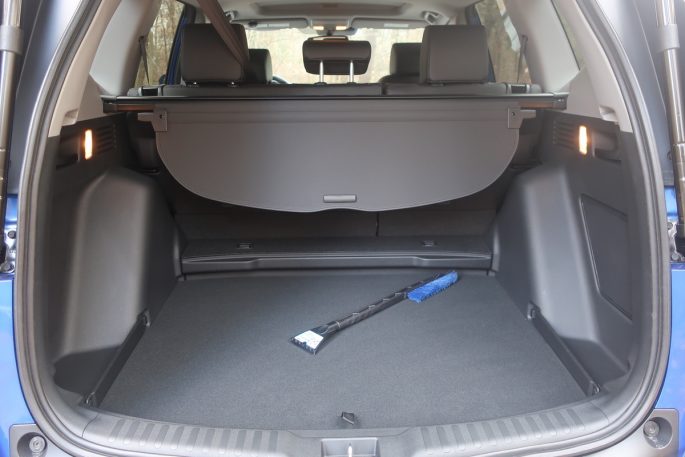 These three things are the most important aspects of the CR-V to the majority of its buyers. Firstly is the rear seat access height, door size, and seating room. Why? People put kids in people in these and take them places. If you have ever tried to load a baby-seat or other awkward object into some smaller SUVs it can be a nightmare. I had to transport kiddos when I had this and the size of the door, the opening, and the height made loading the car seat in a snap. The second piece is what I consider the most interesting piece of the styling refresh the CR-V got, which is the tail light package that it sports now. Yes, styling does play a little factor in the buying decisions made in this segment of the market and at least five people who I’d consider prime consumers for this vehicle (practical, non-performance oriented buyers) commented on how they liked the tail lights. Weird, but true. Lastly there’s the space. The CR-V continues to be a class leader in this department and whether it is kid stuff, groceries, clothing, a Home Depot trip, whatever, the CR-V can swallow it. Many SUVs of this size compromise storage space for the back seat area. Honda is playing the right notes here with ample rear room and this very large storage area in the back. 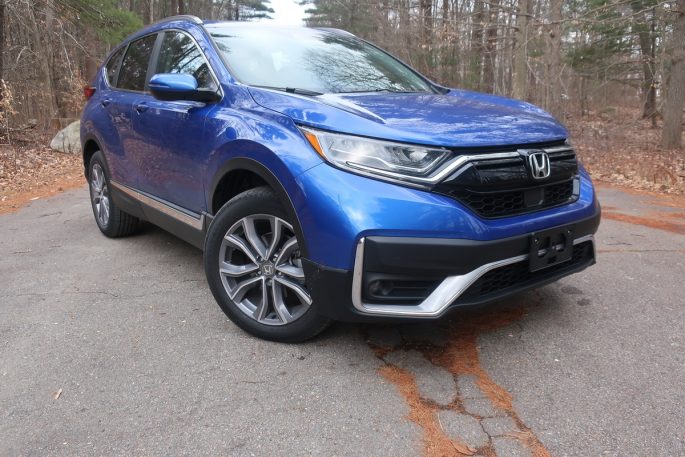 The bottom line is that for a retail price of $34,000 and change you can buy one of the most reliable and best selling small SUVs on the market. That money gets you amenities that are present and available in far larger, more expensive SUVs, it delivers you over 30mpg on the highway, and it moves your friends, kids, and stuff around with ease. What it does not get you is that feeling of automotive excitement and anticipation when you hit the key. Guess what? To potential customers and buyers of the Honda CR-V, that’s exactly what they want. No surprises, no shocks, and a steady, solid ownership and operator experience. The CR-V continues to deliver just that and if you’re wife, friend, or family member is looking for something in this segment, they need to drive one of these before they make their final choice.

Happy 3/16! Here's Some Love For The Little Pontiac 316ci V8 Does COVID-19 Have You Stuck In The House? Here Are Some ARP, Trick Flow, And Meziere Parts For Your Ford That Will Keep You Busy!

4 thoughts on “Steady As She Goes: The 2020 Honda CR-V All-Wheel-Drive Touring Lacks Surprises, Just What Its Buyers Want”