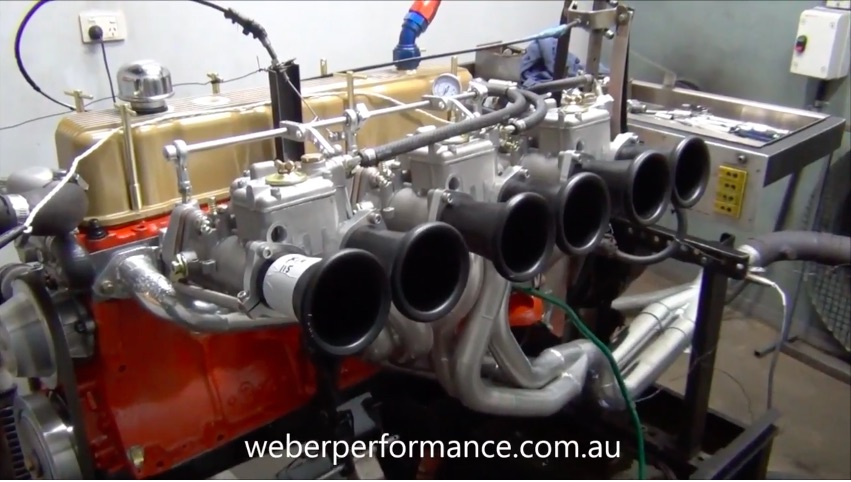 This is awesome. So when we talk about inline six engines from Australia we often find ourselves yapping about the “Hemi six” that stood out as one of the most well know and celebrated engines of Australia’s muscle car era. This is doing a disservice to another hard working little engine that may not have been a high performer from the factory but one that can be built into a literal screamer today. We’re talking about the 202ci Holden Red inline six engine that made 135hp from the factory but makes more than 325hp on this dyno in full race trim, complete with a brace of Weber carbs gulping loads of air.

The Red designation comes from a very simple place…the engines were red. Holden inliners started with the Grey motor, evolved into the Red motor, and then went to the Blue motor as time passed. With 135hp from the factory and we’re sure some decent torque (its an attribute of inline six engines that everyone seems to love) it is kind of amazing that you are seeing this thing make the power that it does here without any sort of boost or nitrous. This little monster seems to have an iron head on it still as well! The fact that it is not a crossflow motor is pretty cool just for the same reasons we were mentioning above.

This engine is heading into a Torana road racing car and we think it may be the best sounding thing on the track when it is out there making laps. Whaddya say?

Respect Your Elders: Watch This 1927 Bugatti Type 35B Absolutely Scream At Goodwood 2017! The Wild Wonderful World Of Auto Racing Is The Best Video You'll See Today - Check Out Racing In 1969