Ride Along Video: Attack Bristol In A Super Late Model and Crank Up The Sound 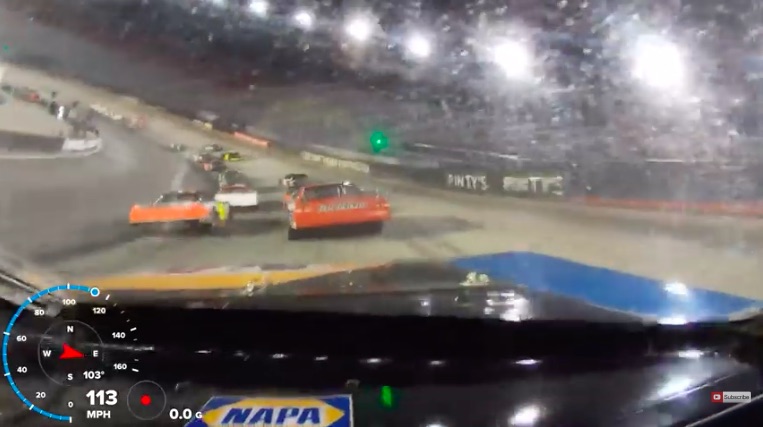 Super Late Models are just about the top of the full bodied food-chain when it comes to short track stock car racing in the USA. These babies weight about 3,000lbs and depending on series rules are making around 600hp (your mileage may vary by your rulebook there), they run these cars EVERYWHERE. Dirt, asphalt, tracks you have never heard of and tracks you have host Super Late Models in some form or another. It’s proving ground for young talent and it is a place where lots of old talent has risen to and stayed at. If you ever get the chance to see these cars in person, do it. They are cool.

In this video we’re at Bristol. Now, I have had the chance to lap Bristol in two distinctly different vehicles.The first was a golf kart and when there are two fatties in a golf kart on the high banking that the place has, it is scary as hell. The second was in the passenger seat of a ride-along stock car. It is a punishing place on engines and on drivers. I could not imagine running hundreds of miles in those conditions once I had seen it from the none-steering side of a race car.

This video has telemetry on it that gets stuck occasionally but when it works will show these cars making more than 120mph down the straight and pulling a consistent 3g in the corners! Imagine about once every 10 second getting blasted with three times your body weight laterally. That’s what’s happening here.

Press play below to ride in a Super Late Model at Bristol – fast stuff!

Blinding Speed: Ride On The Back Of A 700hp V-10 Powered Dallara SP1 As It Passes EVERYTHING At Daytona Top NASCAR Crew Chief Cole Pearn Resigns From Joe Gibbs Racing, Leaves Sport For Family Time