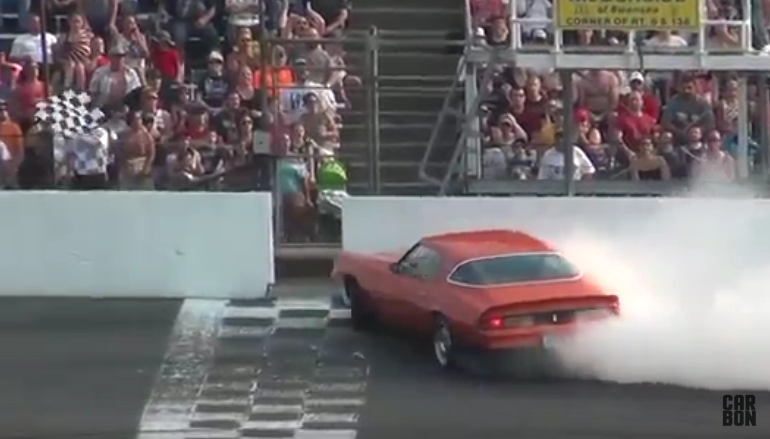 Woah mamma is this a close one! To set the scene, we are at the Seekonk Speedway in scenic and beautiful Seekonk, Massachusetts for a night of fun and excitement. One of the features being run between the classes are the vaunted “spectator drags”. We have shown many videos of these things before but for those of you who will comment that this is a circle track and not a drag strip I’ll explain. Two cars, standing start, first guy around wins. Pretty simple concept and wildly fun to watch because you see match ups like the one here between a mild pro touring style second generation Camaro and an all wheel drive Subaru.

The Subaru lines up on the bottom of the track and its AWD helps the car to leap off to a great start and the Camaro is at an immediate disadvantage. Camaro guy makes up some ground on the back straight and then decides to get really aggressive when coming into turns three and four. Carrying more speed than the car can handle, it begins to wash out with the back end coming around to pass the front. Of course, centrifugal force is also carrying the car up the banking and towards the wall as this adventure is unfolding.

It looks like the car is about to be really mangled when physics, the hand of a sympathetic god, or just plain luck intervene and it never touches anything. There cannot be more than a foot between the pristine orange paint and the concrete wall at multiple points in this spin. The dude almost manages to screw it up at the end again as well because he snaps the throttle and nearly clips a fender before blowing some big smokey donuts on the track as a means of saying, “Wow that was close!”

For all the wrecks, fights, and calamities we have shown from the spectator drags it is nice to see one of these things come out in favor of the driver!

PRESS PLAY BELOW TO SEE THIS CAMARO COME MERE INCHES FROM THE WALL!