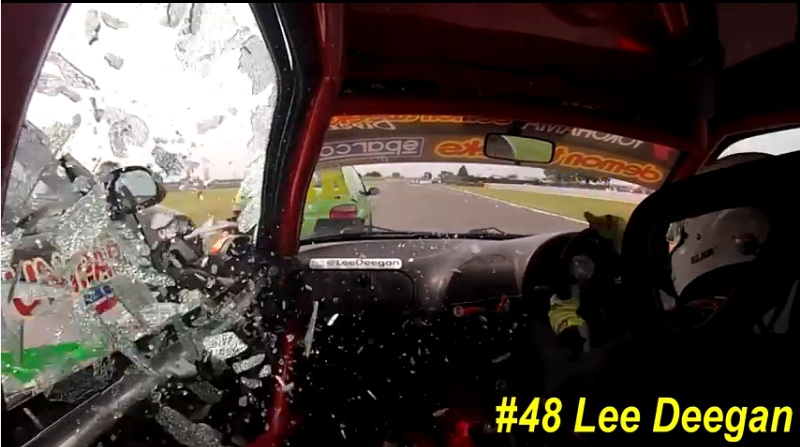 That lead photo is no special effect. In fact, that’s the window being blown out of a tiny racing hatchback as it was being sideswiped, AFTER it was up on two wheels and on the grass next to the course. What if we told you the entire three minutes of the video below is basically just like this. Without exaggeration, hyperbole, or my fingers crossed behind my back, I can tell you that this is by far the most entertaining road racing video I have ever been tipped to and posted to the blog. The cars being featured are part of the 750 Motor Club series of events which have multiple classes. These guys are racing in the aptly named stock hatch class. Gutted, caged, and stock beyond that, these little bastards are hilariously awesome on the road course and by awesome I mean a devilish handful. They slide, they skitter, and they hit each other…a lot!

I’m going to hazard a wild guess and say that most of the guys racing these little cars also have other more heavy duty machines they compete in. I only say that because the drivers are incredibly aggressive in these things to the point of it being comical and some part of me thinks that these cars allow the boys to blow off some steam and have some fun. I may be COMPLETELY wrong about that but holy smokes is this deal awesome to watch.

Between the pained screams of the little cars and the Mad Max driving tactics, you’ll be laughing, cringing, and cheering like I was. Rohan Guest gets the props for pointing me toward this three minute slice of heaven. He’s officially the man! Now, if you’ll excuse me, I am going to watch this for the 685th time.

Best of 2014: Watch A 270hp Golf Kart Based Electric Dragster Power Wheelie Itself Completely Over Backwards At The Hit Of The Throttle Best of 2014: Dealership Attempts To Fix Mustang By Driving It At Redline In First Gear Everywhere, Caught On Camera