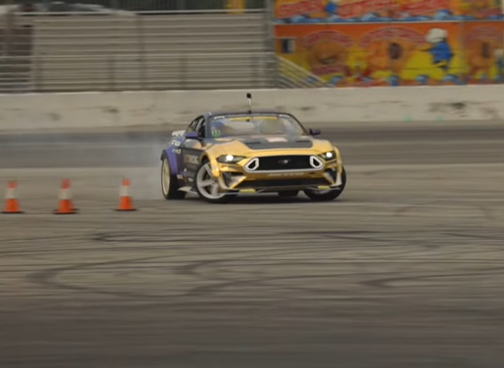 Chelsea Denofa is one of my favorite drifters. This dude is super chill, super fun to be around, and puts on a show with a smile every time he’s in the car. He and Vaughn Gittin Jr. are a fun team to watch in their Fun Haver Fords at events all over the country, but when I get to announce their action at Holley’s Intergalactic Ford Festival in Bowling Green, it’s always a good time. But this here video is something special. In this video, you are going to see Chelsea taking Alex Taylor out for some Drifting lessons. If you aren’t familiar, Alex is a drag racer who has been building and racing cars since she was a teenager and she’s progressed from 12-second cars all the way up to her current family-built 1955 Chevy that is capable of running in the 6’s. But she’s never been a driver of things that turn corners.

Yes, she was part of a team at LeMullets, but this is not her thing. She doesn’t autocross, road race, or drift. So can Chelsea make her into a drifter in one day? I know one thing, whether she’s good or not it’s going to be fun to watch, and we aren’t going to spoil it for you. Check out all the action below.