Roadkill: How The Hemi 1955 Chevy Was Built – In All Of Its Sleep Deprived, Stop And Go Glory 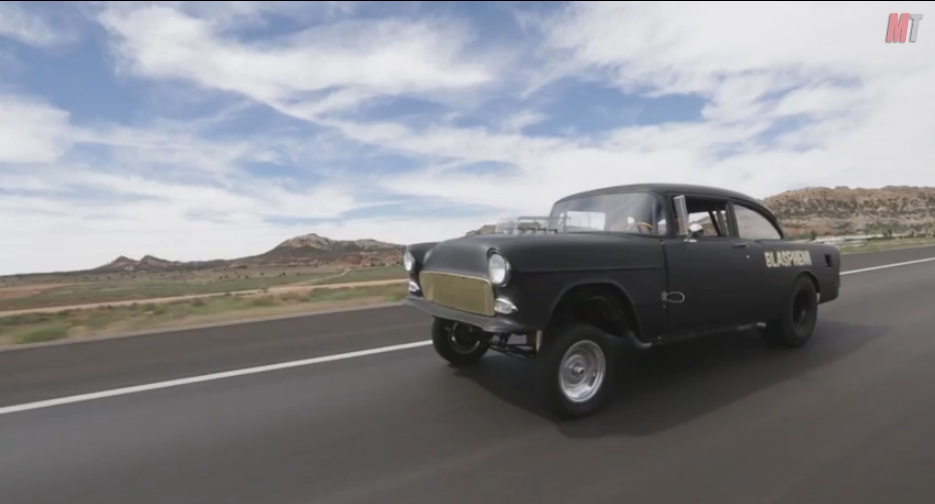 Unless you live under a rock, surely you have heard of the 1955 Chevy build that Finnegan dreamed up decades ago and had begun to actually construct on Roadkill about a year and a half ago. The guy always wanted to own a straight axle ’55 with a Hemi in it and if you remember one of the early Roadkill episodes, they towed the ’55 body that he had bought up to Jim Meyer racing to have it mounted on one of Meyer’s gasser style chassis. From there the car sat dormant for a long time until the fellows got the idea to take it to the Grand National Roadster Show earlier this year. With a 15 day window, they went down in flames when some major issues jumped in their way….and the car sat quietly again.

With Power Tour looming, the guys got after the car again with their signature zeal and the plan was to have it shipped to New Jersey where they would park it in Don Schumacher’s pit area and hang out at the Englishtown, New Jersey NHRA event before cruising the car down to Charlotte for the beginning of Power Tour. Despite incredible effort and event going so far as to draft the driver of the shipping truck into working on the car, they didn’t get it done. The good news is that their fallback plan was even cooler and they accomplished that one. Too late for the drag races, they decided to finish the car and leave to drive all the way across America and make the start of Power Tour.

This story shows you the highlights and low lights of what we just told you about above. There’s some impressive work that these guys have done to the car, stuff like the headers which seemed like an impossibility and will to you as well when you look at what they’re working with in terms of space. This episode of Roadkill drops off just as the pair are heading east towards fun and adventure. The next episode of Roadkill will show the trip across country and all of its various highs and lows….of which there are a few!

PRESS PLAY BELOW TO SEE HOW FREIBURGER AND FINNEGAN THRASHED AND MASHED ON THE HEMI ’55 TO GET IT DONE FOR POWER TOUR!

5 thoughts on “Roadkill: How The Hemi 1955 Chevy Was Built – In All Of Its Sleep Deprived, Stop And Go Glory”