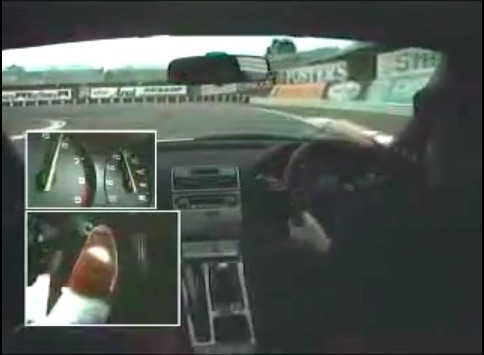 Ayrton Senna’s relationship with Honda has been well documented. After Senna started working with Honda in 1988, Honda decided that a great way to benefit from their new talent’s abilities was to involve him in the development of their new car, the NSX. Senna would visit the Suzuka Circuit in Japan and with Honda engineers present, would thrash an NSX prototype at full kill mode. Over the many testing sessions, Senna stressed to the Honda engineers that the car lacked chassis stiffness, something that he harped on so much that Honda decided to adjust the NSX to Senna’s liking. Hey, when you have one of the most winning F1 drivers ever telling you something is wrong, listening is a good idea.

This video has been around for ages, but it’s not so much Senna’s driving that is the point, it’s his footwork. In a pair of loafers pulled straight from 1988, Senna proceeds to take out all of his anger, frustration and stress on the car in the hopes that he can pinpoint a flaw to make the upcoming sports car better. His feet, however, dance with the kind of accuracy you would attribute to Fred Astaire, tapping, rolling and doing just about everything but treating the pedals as on-off switches. If you think you are good at running three pedals on a road course, this is a reality check.

The Wild Wonderful World Of Auto Racing Is The Best Video You'll See Today - Check Out Racing In 1969 The Land The Man and White: This White Tractor Promotional Video Was Made As The Company Was Going Broke

One thought on “Classic YouTube: Ayrton Senna’s Footwork As He Beats A Honda NSX Around Suzuka Circuit”