Cool Video: Watch Pro Driver Robb Holland Predict The Crashing Of A Porsche On The Nurburgring Before It Happens 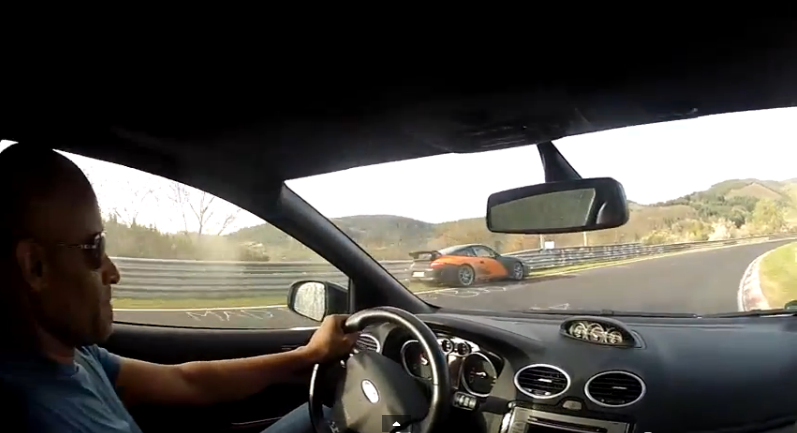 Robb Holland is not psychic, but he is a professional race car driver and driving instructor who has made hundreds and hundreds of laps around the famed Nurburgring in Germany. As we told you yesterday, longtime pal o’ BangShift Bill Caswell is there this week to race in a qualifying event with Robb and his team to try for a spot in the 24 Hours of Nurburgring later this Spring. Prior to this week, Caswell had driven around The ‘Ring for fun but never in a competition environment. He had also previously just made laps in a street car like the (we think) Ford Focus you’ll see Holland and Caswell riding in during this video. We’re going to get more into the whole Caswell story deeper today but first we have to explain why this video is very interesting.

Holland and Caswell are making these laps so that Caswell can learn the course and since anyone can get out on the ‘Ring at any time if they pay the fee, you never really know what you are going to see on the track. In this case, it is a Porsche GT3, which is a hairy beast of a car that in the right hands can make some real music and turn some very impressive laps at whatever course you choose to put it on. The hands you will see working the Porsche in this video are not the right hands. We’re not sure if the driver of the car was being instructed or just “playing race car driver” for the day but Holland and Caswell were pretty much eating the Porsche up in their humble Ford.

Pretty soon after the Ford begins to close the gap up on the Porsche, Holland starts to critique what the Porsche guy is doing and at one point actually calls the fact that the guy will soon drive off the track a good margin before it happens. He then remarks about how the guy is both over driving the car and looking back at them rather than driving looking forward at the course. Less than 30 seconds later the Porsche goes into a slide while coming out of the corner and whacks the wall. It is not a crazy hit, but we’re sure the car was hurt. In fact, commenters on the video say that this Porsche limped back out on the track, evacuated every fluid it had and essentially caused so large an oil down that the track was closed for the rest of the day. PARTY FOUL.

To us, this video is an interesting look into the psyche of a racing driver and how “course knowledge” is such a critical element in being fast.

The Most Original, Factory Documented, Lightweight 1962 SS 409 Impala In The World Is Headed To Auction 2014 Lonestar Round Up: Meatheads Kick Off BBQ Party

3 thoughts on “Cool Video: Watch Pro Driver Robb Holland Predict The Crashing Of A Porsche On The Nurburgring Before It Happens”