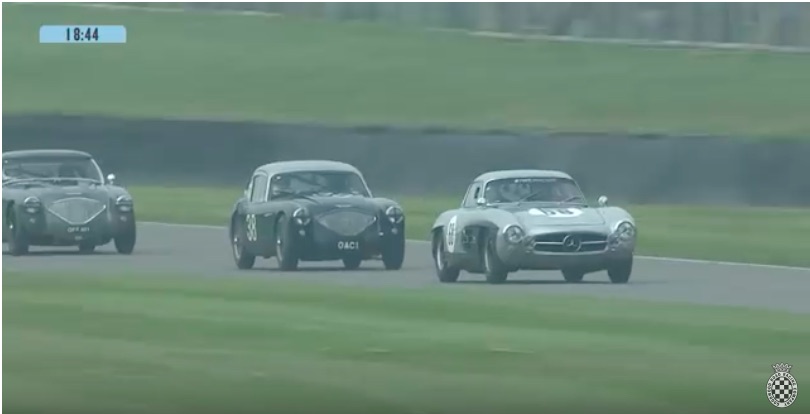 The neat thing about professional drivers stepping onto the track with guys who are either rank or serious amateurs is that they often get chased and chased hard, especially if there is a disparity in horsepower or the capability of their equipment. This video shows David Coulthard racing his Mercedes Gullwing at Goodwood and it is awesome because he is really having to drive his ass off in the face of some cars that seem to be lighter and at least as quick as his. Like a true professional he does not do anything dumb, but wow is he someone that can wheel and since the guy raced just about every damned thing you can imagine, that makes some sense.

The start of this race is wild to watch because there are so many cars, so many different cars, and so many guys just bobbing and weaving to find some real estate on the track. We were expecting to see cars bouncing off of each other and shooting into the grass but as close as it got back there in the back, everyone seems to have kept their head attached and their fenders straight.

There’s an Austin Healey, there’s a Lotus, and other cool stuff that try to knock him off in terms of the leader position. The drum brake equipped Mercedes is under constant attack and we get to watch from both the inside and the outside.

Racers race. That’s what they do. While we think it is lame that NASCAR pros race in the Xfinity series, we think that it rules when guys compete in events like this and have to really work their ass off to hold or gain position.

K&N Spring Fling Million: Now THIS Is How We Celebrate Spring Around Here! Big Bucks: This 1979 Monza Was Raced In Trans-Am, Is Amazing, and We'll Need To Rob A Bank To Buy It