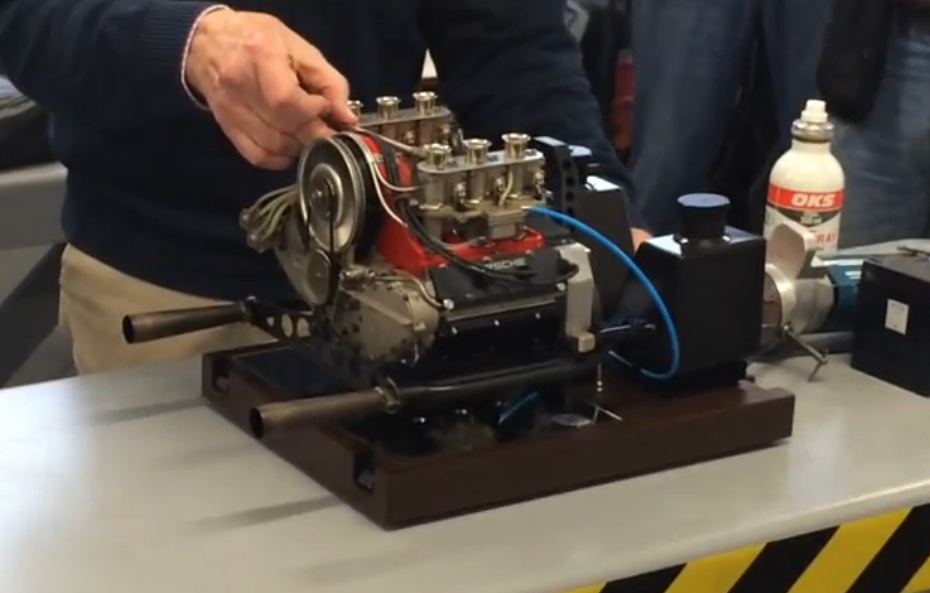 We love scale engines of all shapes and sizes, including ones that aren’t in a V-shape with eight cylinders screaming. Take this incredible Porsche flat six for example that was hand crafted by a Dutch racing driver who just so happens to be a huge Porsche guy. Who saw that coming, right? Anyway, the air-cooled Porsche flat six is as iconic an engine as any company in history has ever produced. It has powered some of the most well known sports and race cars in history all while making that angry boxer noise that it became so famous for. Yes, this one makes much the same type of noise although it is a little more soprano than the full sized version.

Our wonder with these engines comes in when you consider having to hand make things like the carbs and how the builders are able to get them into such exacting detail. Then there’s stuff like the ignition system, the rotating assembly, and the simply fact is just because the stuff is small doesn’t mean is can be sloppy. If your tolerances are not right in a large engine they won’t be right in a small one and the thing will run equally as bad as its larger counterpart. It is just that simple.

Whether you are a Porsche fan or not, you have to respect the mechanical and creative genius that went into building this thing. Of course the fruits of the builder’s labor come when the engine fires up and makes that mechanical noise of combustion that we all love to hear. The sound at idle is one thing but when the operator cracks the throttle it really wakes up!

PRESS PLAY BELOW TO SEE THIS PORSCH FLAT SIX RUN –