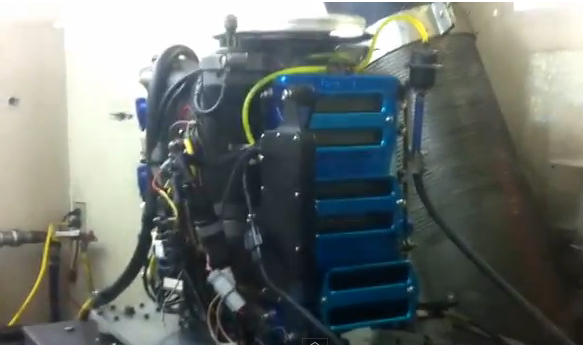 I don’t know lots about boat racing, but when there is a “Formula One” class, I’m going to assume it is pretty serious business. From what I can gather about the engine that serves as the centerpiece of this video, it is a highly modified 2.5L Mercury Marine V6 used in the Formula class to power a racing boat. There is no mention as to the horsepower produced, but the sound of the warbling exhaust note at nearly 11,000 RPM can only be described as industrial. It sounds like no car engine on Earth, I can tell you that. I’m not sure but this may be the same engine type that hot rodders have laid down and used in Bonneville cars before. Cue hate mail calling me a moron in…3…2…1…

So with the amount of RPM this thing is turning it must make some real HP. Again, from some light research we have done, the engine should be making close to 400hp and that is bad ass from a naturally aspirated six cylinder measuring out to about 160ci but not insane for a two stroke engine, we get that.

The boats that these engines power can do 0-60 in two seconds or less and will run 155mph flat out on good water conditions. Plus they turn! These aren’t drag boats. Maybe that’s the wildest stat of all.

As wild as one of these little angry motors sounds on the dyno, we can’t imagine the screaming wail of an entire field of them coming by. Sure, big blocks and small blocks are cool, but seriously. How many of you knew such a thing as this even existed? We knew that there were some hard core outboard engines out there, but these are wild! Is it still a V6 if the mill is stacked on end? You tell us!

HIT THE LINK BELOW TO SEE ONE OF THE ANGRIEST SIX POPPER ENGINES IN MOTORSPORTS SCREAM TO 10,500 RPM ON THE PUMP!