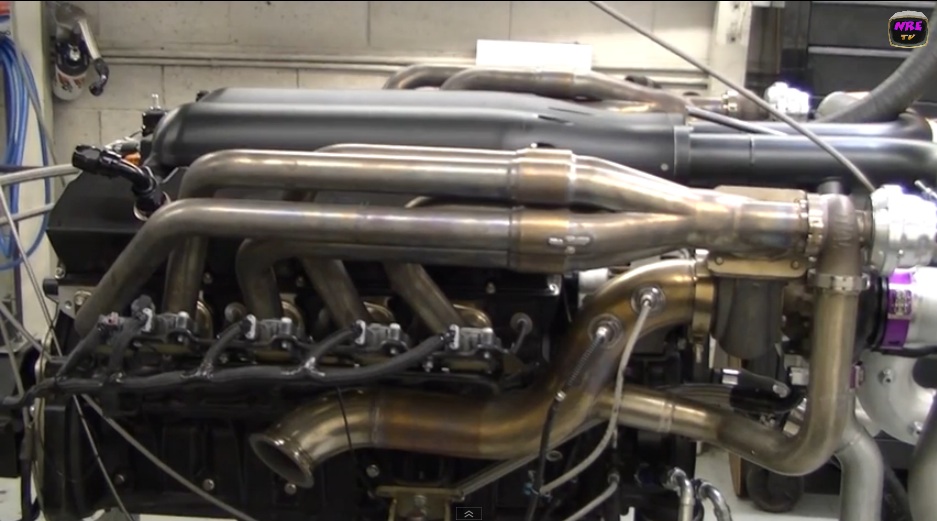 The engine dyno at Nelson Racing Engines out in California has been assaulted by more powerful stuff than this twin turbo V10 that started life in a Dodge Viper but it is surely one of the most unique plants to spin the pump out there at the shop. The engine was sent to Nelson and upgraded with better internals as well as one of his intake manifolds among other pieces by the Roadster Shop who will ultimately plug the engine into the front of a 1969 Dodge Charger that a customer will soon be tooling around in and destroying tires with aplomb. The Roadster Shop’s cars all have interesting styling and a look all of their own so we cannot wait to see this thing. We’re wondering if it is a SEMA car or something along those lines. Either way, it will run like the flipping wind with 1,200hp.

The one thing we really liked about the engine was the sound and that is something we don’t think we have ever said about a V10 Chrysler engine before. They usually have a weirdo kind of moan thing happening but this one has a legitimate wail to it that sounds like something out of an Italian exotic car rather than the garbled sounds of a tuba that someone is screaming through at the bottom of a swimming pool. The five into one headers are spectacular looking and have a nice glow to them when the dyno pulls are made.

As he normally does in these types of videos, Nelson takes you for a walk around of the engine before getting after it on the dyno. We’re interested in your thoughts on this. What’s your take on the sound? Dig the packaging? Something you would ever consider building if you had piles of money to burn? Tell us in the comments below.