Ever Wonder What Happened To Eddie Hill? At 78-Years Old He’s Still Racing! 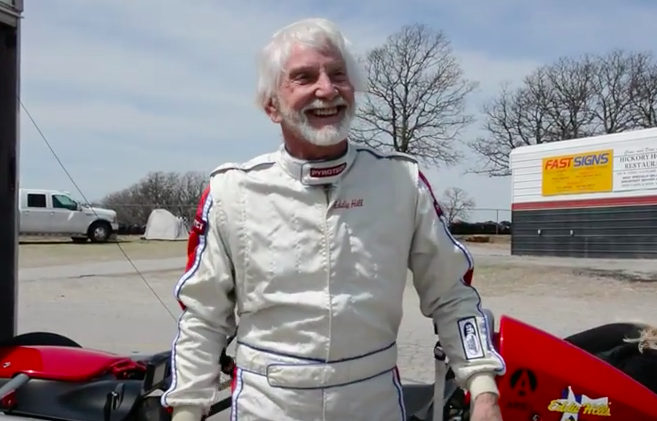 Eddie Hill was once quoted as saying, “You only go around once in life but if you do it right, once should be enough.” Judging by the fact that the 78-year old Hill still seems to be loving life and having fun at high speeds, we’re thinking that he has “done it right” by any measure.

We literally stumbled upon this short but great interview with Eddie and Ercie Hill that was recently shot as a segment for what looks to be a Texas based television show. In the interview Hill talks about how he got into racing and his career first going in circles, then going in straight lines on both water and asphalt.

Hill will forever lay claim to the first ever four second top fuel pass in drag racing history when he ran 4.99 at the Texas Motorplex during the 1988 IHRA Texas Nationals. Still with the humble tone he maintained through his whole career he talks about his business (Eddie Hill’s Fun Cycles) which he has been successfully operating for a half a century now and the fact that his new passion is racing Ariel Atoms, the flyweight, stripped, road/track cars that can carve corners like few other things on Earth. In fact, this interview was done at the track where Eddie was racing.

Hill is one of those guys who people ask about with some frequency in regard to their current doings and this interview which was posted in January 2015 is about the latest update you’ll see. He and Ercie seem to be happy and loving life still, which is awesome. Matt Hagan’s nitro funny car was draped in Pennzoil colors at the recently completed NHRA Fall Nationals at the Texas Motorplex and people responded to it in a way that was pretty stunning to us. They loved it and it seemed like Hill was there himself as his bright yellow Pennzoil dragsters were staples on the tour for years.

To us it is always awesome when you see a guy who has had such a great career in multiple disciples of racing still having fun and going fast, especially when he’s 78 years old! Hill seems to have led a great life both on the track and in the real world and there’s no signs of slowing down for him yet.

Press play to hear Eddie Hill talk about his career and life in racing – awesome!

Registration For The 2015 Gran Turismo Awards Is Open For SEMA Vehicles! Get In Now! Spirit Animal: This AMC Has A 390 Under The Hood, Lots of Street Miles Under Its Belt, And 10-Second Time Slips In Spades

14 thoughts on “Ever Wonder What Happened To Eddie Hill? At 78-Years Old He’s Still Racing!”