Funny Videos: Doing it Wrong But Oh So Right on the Autocross 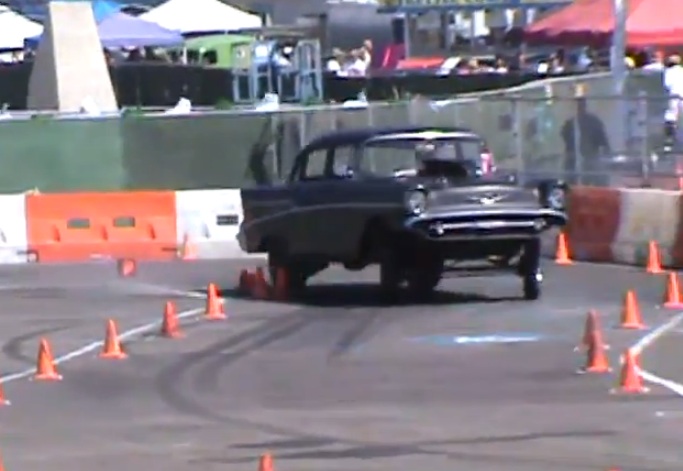 Make no mistake, we are not mocking the dudes in the videos below. After all we’re totally about having fun with our cars and the guys in the videos are doing just that. What you’ll see below is a dude in a 1957 Chevy gasser on the autocross as well as a dude in a totally bitchin’ 1960s Nova wagon carving up the cones and then, well, you’ll see.

Our intention in showing these videos is to prod all of you out there to get in your cars/trucks and use them for cool stuff, even if it isn’t an arena that they will shine in. The guy in the ’57 Chevy kills cones like none other and appears to have one arm firmly placed on the door, but we all know he was really having the time of his life out there. The man does kick ass in the small acceleration zone and you cannot take that away from him.

This week we are going to be bringing you all the info about the upcoming Optima Ultimate Street Car Invitational that will be happening at Las Vegas Motor Speedway directly following SEMA and that contest will showcase some of the hardest handling pro touring cars in the nation. RideTech has a flotilla of cars running their components at the race and we’re going to profile those men and women so you know who’s who. Those are the hardest core and the hardcore pro touring and autocross competitors out there. This video highlights what fun it is just to dangle your toes in the cone filled water to have some fun. You don’t need to be Bret Voelkel out there to have a blast…just drive your junk!

Bring on the cone killing!

Copart Cadavers: A Collection Of Catastrophically Destroyed Corvettes This Cell Phone Footage Of A Head On Collision Is Absolutely Incredible - Everyone's OK, But Three Cars Get Totaled

4 thoughts on “Funny Videos: Doing it Wrong But Oh So Right on the Autocross”